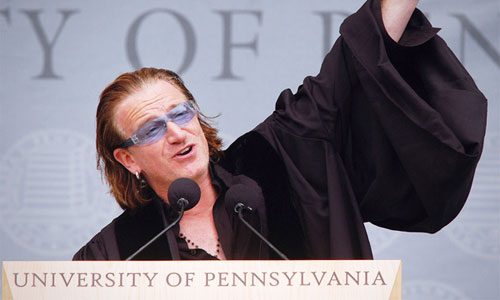 Graduation is only a concept. In real life every day you graduate. Graduation is a process that goes on until the last day of your life. If you can grasp that, you’ll make a difference. ~Arie Pencovici

Commencement speech on graduation day plays a pivotal role in every student’s life; not only to make them realize their dreams and accomplish them through overcoming odds but also give them a realistic outlook towards life and the world. The purpose of education can truly be accomplished if the outgoing students learn to enrich their own lives as well all others, uplifting the weakest from their troubles and making the world a better place to live in.

Randy Pausch, the professor at Carnegie Mellon, is widely respected for The Last Lecture: Really Achieving Your Childhood Dreams. In 2007, he was diagnosed with pancreatic cancer and he died after 2 months of this speech on July 25, 2008 . His speech was highly impactful and inspiring. In this speech which was delivered to the Class of 2008 at the Commencement ceremony on May 18, 2008, he talks about the importance of true living and pursuing dreams. He states, “life isn’t about how long we live, but about how we live.” His insightful speech proved his passion in living, teaching, and respecting the relationships.

Arnold Schwarzenegger, an international movie star and the 38th Governor of California, spoke about how one can overcome from difficulties of life to make one’s dream come true, citing himself the living proof. He shared his life journey, odds, failures which could not stop him from achieving his dream. He inspires not to fear of failures; rather face and overcome them.

This is the most encouraging commencement speech that explains three chief points that changed the life of Steve Jobs that show how life is what you make of it. His finishing line, “Stay hungry. Stay foolish,” from a 1970′s publication inspires graduates never to stop until they accomplish everything what they want from life.

Bono, the lead singer in the famous rock band U2, is widely famous for his work in African region. Through his humorous but passionate speech he encourages everyone to find reasons to live for and fight against the poverty, and injustice that African people are living with every day. He inspires everyone to help others grow and prosper, to know the cause of our living, to find out the cause one is most passionate about, to use skills and knowledge to make life useful and worth liiving.

JK Rowling, one of the most popular author, explains the significance of imagination in real life and how failures help us grow and become what we want to be. It was most insightful speech mixed with humor, honesty and serious facts of life. She shares the experiences and life journey to be what she is today.

Ellen is one of the most popular talkshow hosts in the world followed by Oprah Winfrey. The show has inspired millions of lives across the world. She started her career as a standup comedian in 1990s. Her speech was mixed of her wit and humor. In this speech, she highlights the points that changed her meaningless life. She inspires graduates to be compassionate, honest, loving and to be true to themselves to accomplish what they want from life.

In his genuine and most cordial speech, he shares his passion for removing injustice from the world; he makes graduates aware of the issues such as poverty, suffering in third world countries, diseases, and lack of healthcare support. He encourages graduates to make life worth living through assisting others to have a better life.

Oprah, a billionaire entrepreneur, the owner of the most successful TV talkshow, The Oprah Winfrey Show, is known to be the most influential woman from the entertainment world. In this speech, she shares some impactful lessons she picked up from her life. She emphasizes on being true and honest in life, learning from failures, and on finding your passion that makes you happy. She states, “If you ever feel that you’re at a loss of what to do, get still, “very still”, and the answer will reach to you ultimately.” She finished her speech inspiring everyone to envision for a perfect life, setting the goal, drawing the map and achieving them.

In his sincere speech, Larry Page shared his dream of creating Google, his journey to it, overcoming odds and making it number1 Search Engine and Internet giant. Google was literary born from his midnight dream. He dreamt of an idea of downloading the web and he took action for it. Besides pursuing the dream, he emphasizes on giving proper value to relationships. In his words, “They matter in every aspect of life.”

Through his speech Obama highlights the ordinary daily existence most people live doesn’t have to be a separate life from the life of our country. He shows how graduates cam make a difference in their ordinary lives by making a difference in the lives of others. His speech was most significant in making students realize their responsibility towards each other other.