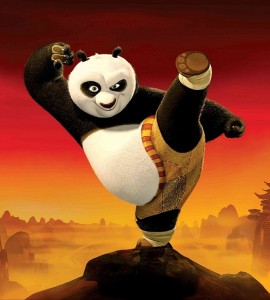 Kung Fu Panda is an animated martial art adventure packed with numerous spouts of wisdom, chunks of inspirational dialogues, and abundant interesting life lessons that are implanted in a predictable storyline. The movie shows how an ordinary big fat Panda, who is unexpectedly chosen to be the ‘Dragon Warrior’ by a shrewd old tortoise Oogway, defends the Valley of Peace by defeating the treacherous and villainous yet most powerful snow leopard, Tai Lung who was found, brought up and trained by Master Shifu.

The protagonist is Po, an indolent, flippant slacker panda who is indifferent to his family noodle shop but is an ardent fan of Kung Fu and idolizes the Furious Five – Tigress, Crane, Mantis, Viper and Monkey – apprentice of Master Shifu. Panda spends his whole day and night desiring and dreaming of learning Kung Fu and fighting alongside the Furious Five without being actually ready to accept the challenges on the way to accomplishing it. On the other hand, Master Shifu tries to distract Panda so that he quits the idea of transforming himself from the bumbling Panda to a toughest fighting machine. His lack of skill, nonsensical words and hilarious and stupid activities confirmed master Shifu’s confidence of Oogway’s unjustified decision. Later, however, he is convinced by the wise Oogway to take panda into his serious consideration and prepare him for the forthcoming threat of destruction. The story is full of wise lessons and handful of significant teachings of daily life.

1. Nobody is ORDINARY! It’s Just how you Explore your Talents

Panda is perhaps the most ordinary and simple character with no apparent talents and gifts. His secret passion of learning Kung Fu was harshly rejected by Master Shifu. He is mocked at by the Furious Five whose consistent snide remarks and despicable sight shatters his self-confidence. He is frequently laughed at for being an undeserving candidate for such a majestic title ‘Dragon Warrior’. At the end, after several rounds of rigorous, tough and brutal Kung Fu training, he becomes a true ‘Dragon Warrior’. The journey to the title isn’t an easy one; he has to fight against his low self-esteem and go against his negative belief to discover his awesomeness or attractiveness.

“Anybody who has ever unraveled the power of inner-strength and chosen to be special can become the most extraordinary hero, after all “There is no charge for awesomeness – or attractiveness.”

2. Live in the present

Oogway: “You are too concerned with what was and what will be. There is a saying: Yesterday is history, tomorrow is a mystery, but today is a gift. That is why it is called the present.”
We grieve over the stubbornly constant past with reverted eye, stand high on the tiptoe to foresee the shadowy and illusionary future. We consciously or unconsciously, deny the core principles of being at peace – living the graceful and sparkling PRESENT. Soon the present becomes past upon which we stay wedged. 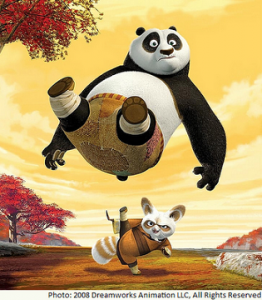 Dejected Panda, after being insulted by Furious Five for dreaming of learning Kung Fu, reached under the peach tree all alone. In the mean time when panda felt afraid of Oogway’s wrong choice as he wasn’t meant to be a Dragon Warrior, Oogway arrived and tried to lighten his despondent heart with the above mentioned old wise proverb. Here Oogway grabs our attention on the most significant fact of life – live your life for today, there is no past or present. Past you have already lived and future hasn’t arrive yet, then why not to live in this very moment, which is at our hand?

3.Explore your special talents and skills

Everybody is blessed with marvelous gifts and talents but you need to believe in yourself and explore them. Extraordinary people visualize their talents and build themselves on it; whereas, ordinary people fail to explore their true potentials. Quite a few reasons are:

1. 1. Trapped in their ordinary self. Panda thought himself to be just a big fat Panda and unworthy contestant even for proper Kung Fu training. Like Panda, ordinary people don’t find themselves fit into pursuing extraordinary dreams and hence they never taste big achievements.

2. Too much concerned about what others think about them. Panda was completely absorbed by the criticism and was hurt for being largely ignored by the Furious Five who he adored for their expertise in Kung Fu. Ordinary people make a firm but delusionary perceptions about their competency upon consideration of what others think and talk about them.

3. Overwhelmed by their false qualms. Panda’s biggest fear was that he might not be able to learn Kung Fu and rescue the Valley of Peace from evil Tai Lung. Having doubts on your ability weaken your strength and keep you from running behind your dreams. “No matter how impossible, out of the universe, unrealistic, and weird your dreams are; someday they are bound to come true if you keep faith in yourself and work on your abilities”

Moreover, ordinary people spend their whole life whirling in the bits and pieces of trivial issues. Panda was ordinary until he discovered his unique talents and skills.

4. Role Models are Just milestones! Don’t try to be their second version

Role models influence our life in an optimistic light, motivate us to put proportionate effort in right direction, initiate to walk the roughest road and accept the greatest challenge and fight against inordinate difficulties to achieve our dream. Acknowledge their role being better precedent and sportive contributor on your way of accomplishment but never ruin your authenticity by becoming the second version of them. They have their own calamity and faults off-stage about which you might be unaware. Moreover, evolving as the first version of yourself by taking inspiration from their lives is the true appreciation of their contribution.

Panda idolized Furious Five and dreams of fighting alongside them but he evolves as the first version of himself and that’s the reason he eventually accomplishes (inner peace), something no members of Furious Five could. 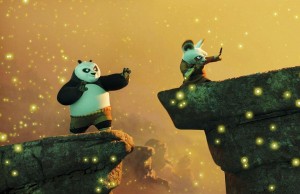 5.The POWER you seek outside lies within you

Do you belief if circumstances worked in your favor, you could have succeeded, or if you had more money you could have improved your disposition and amplified your possessions? If you do then you have given your power away to the external factors who’ll keep controlling you. Circumstances are never as you wish them to be, it is your magical energy, inner strength and unbeatable spirit in deep within that assists you to turn them into your favor- don’t ignore that you are the ultimate source of power.

All Kung Fu fighters including Tai Lung desired to have the ‘Dragon Scroll’, which was supposed to make its owner rich with infinite power. When Tai Lung opened the scroll finally for having it, he found it to be empty. All he could see was his own image, but Panda learnt “To make something special you just have to believe it’s special.”

6. The secret of reaching your destination can be hidden in your biggest weakness

We often defend our weakness by not really confronting it. Our greatest weakness might hold the key to our complete transformation. All we need to do is perceive it, accept it and then consider utilizing it in best possible way. Ask yourself what’s your biggest fear? Why are you running away from it? Is it life-threatening? Have courage to confront it and instead of eliminating it, learn to channelize it in your favor as Panda did.

Food was Panda’s greatest weakness. When Master Shifu discovered that Panda was extremely motivated by food and often ate a lot to alleviate his depressed mind. Master Shifu channelized Panda’s weakness by building mental connection between food and exercises, which ultimately led him to a great Kung Fu master.

7. Be determined enough to stand your dream

Perseverance is instrumental in maintaining your consistency on the way of accomplishing your dreams. Time comes when criticism pinches you to bow down on you knees in front of defeat; it is determination that protects your dream from falling and crushing.

Panda was heavily neglected, ignored, criticized for being so dumb in any Kung Fu move by Furious Five and Master Shifu. He was distressed and depressed but didn’t give up on himself. After initial disbelief he finally stood for his desire and worked hard to win it. Persistence pays back provided you stand stoned against all criticism (sometimes by wise and knowledgeable people). Remember, even the most intelligent or talented people can be beaten by perseverance and patience. 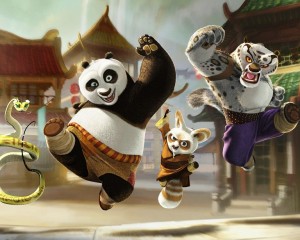 8. To succeed you don’t have to be better than the best

Panda was never was as good as the Furious Five, he even could not think of being equal to them and when he expressed his fear to Master Shifu “They’re five MASTERS, and I’m just ONE me!”, Shifu wisely replied, “But you will have the one thing no one else has.” What makes you a better contender is not comparison but your own distinct way of doing it.

9. Never disguise anybody for their appearance

Don’t misjudge your competitors by appearance or size, the core principle of judging them is their competency. When Tai Lung denied his defeat saying, “You can’t defeat me! You… you’re just a big… fat… panda!” Panda clutching his weak punch by the finger and replied, “I’m not a big fat panda. I’m THE big fat panda.”

10. Make sure you are content in what you are doing

Never pursue others’ dreams! you will end up dedicating your whole life making others happy without any big achievement. Spending time and putting in hard hard work aren’t enough. Happiness and contentment are the key to your evolvement as a better person. Pursue something that enlightens you and encourage thousands of people to follow their passion. Panda was never happy at his family-run noodle shop, he knew it wasn’t his destiny; therefore he never dreamt of making his business big. He always longed to learn Kung Fu and when he pursued his dream he became the greatest.