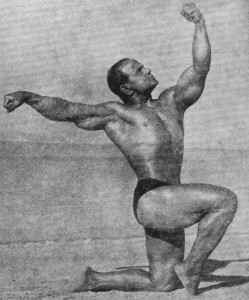 Indian bodybuilder Manohar Aich, who is better known as Pocket Hercules for his 4 feet 11 inches height, became the first Indian to win the Mr. Universe title in 1952. He also won three gold medals in Asian Games’ body building. By implementing natural techniques and having a simple diet of fruits, milk, vegetables, rice, and fish Aich developed an amazing body with 54 inches chest and 23 inches waist. Acute poverty, extreme struggle, and pocket-sized height could not beat his perseverance, and keen desire to pursue his passion to become a renowned body builder.

Manohar Aich was born at a small and remote village named Dhamti in Comilla District of Bangladesh. He became inspired to body building and exercising from his school days after seeing a group of wrestlers in action. However, at the tender age of 12, he had a sudden and gruesome attack of black fever after which his health severely broke down. He started doing exercise to regain his strength and went on improving his physique. In 1942, he joined the Royal air force where he started extreme body building and he was noticed and encouraged by a British officer Reub Martin. Reub Martin praised his physique and soon introduced him to weight training. After some months, Aich was suspended and imprisoned for his involvement in the protest against the colonial oppression. Even in the prison, he didn’t stop bodybuilding, without any equipment or advantages he began weight training 12 hours a day and prepared himself for the world championship. His dedication, courage and seriousness impressed the jail authorities who agreed to provide him special diet to help him improve his stamina and muscles.
Aich was released upon India’s independence in 1947. He would struggle with his wife and four children and had little money to pursue his passion. In 1951, he joined the contest and came second but he didn’t return from London. Instead, he stayed and kept preparing for the next contest in 1952. Finally, his patience and perseverance rewarded him with the title ‘Mr. Universe’. Ever since, Aich has traveled across the world for bodybuilding shows and earned international fame for his extreme strength and muscle control. He currently lives in Kolkata. 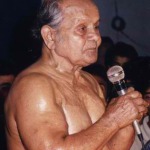 At the age 100, Aich continues to live his dream. It’s been 60 years since he was crowned Mr. Universe but he still looks strong with his ripping muscle, wrinkling face and toothless grin. He says taking trouble lightly and remaining calm and happy during difficulties are the secret of his longevity. ‘I kept myself away from any sort of tension despite of unbeatable struggle to earn enough money from my very young days. I remained happy throughout my life and difficulties could hardly distract me’