“The battles that count aren’t the ones for gold medals. The struggles within yourself – the invisible, inevitable battles inside all of us – that’s where it’s at.” – Jesse Owens 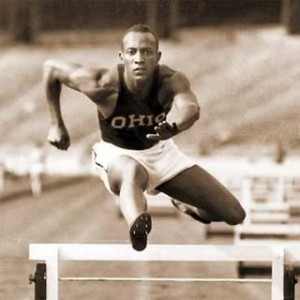 Ohio state star Jesse Cleveland Owens became one of the greatest athletes of his time by dominating the 1936 Olympics with his spectacular triumph. He not only mesmerized the world with his determination, courage, and glorious winning of four gold medals (100 meters, long jump, 200 meters, and 4×100 meter relay) but also infuriated the Nazis and struck a harsh blow to their leader Adolf Hitler’s theory of considering Aryan as the master race. Adolf Hitler intended to showcase and highlight his Aryan ideals and greatness at the 1936 Olympics but Owens’ magnificent victory proved him otherwise. In spite of the racial brutality and hatred, people across the world embraced his grace in athleticism, courage and greatness in sportsmanship.

A black 22-year-old son of a sharecropper who endured extreme racial slur immediately became international champion; people forgot about his inferiority and idolized him as a man of purpose and forn his grand sportsmanship.

Jesse Cleveland Owens was born in Oakville, Alabama on September 12, 1913 to Henry Cleveland Owens and Mary Emma Fitzgerald. He was the youngest of ten children. He moved to Cleveland, Ohio with his family when he was nine years old for a better life and opportunity. His father and older brother would work at a steel mill. In his childhood, he did different jobs in his spare time; he would load freight cars, deliver groceries, and work at a shoe repair shop. From early childhood, Owens had had a passion for running. He would practice before the school started with the assistance and encouragement of his junior high track coach at Fairmount Junior High School Charles Riley, whom he attributed his success throughout his athletic career and life. Owens drew first national attention while studying at the East Technical High School in Cleveland where he equalled the world record of 9.4 seconds in the 100-yard dash. In the year 1933, at the National High School Championship in Chicago, he successfully attempted the long jump of 24 feet and 9 1⁄2 inches. While attending the Ohio State University, Owens’ father managed to find a decent permanent job and he was given a sports grant. His hardships ended and he never looked back ever since.

At Berling Olympics, Owens gave the world what we call “The Greatest 45 Minutes Ever in Sports” – he broke 4 world records in just 45 minutes. His achievement has been marked as the world most memorable athletic moment ever.

“We all have dreams. But in order to make dreams come into reality, it takes an awful lot of determination, dedication, self-discipline, and effort.”

“If you don’t try to win you might as well hold the Olympics in somebody’s back yard.”

“Friendships born on the field of athletic strife are the real gold of competition. Awards become corroded, friends gather no dust.”

“A lifetime of training for just ten seconds.”

“Find the good. It’s all around you. Find it, showcase it and you’ll start believing in it.”