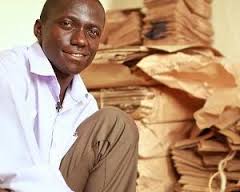 Born in the rural area of Mbale, Uganda, Andrew Mupuya started his life back in 2008 at the age of 16 when his parents became unemployed and couldn’t afford his studies. In 2008, when the Ugandan government decided to ban the use of the polythene plastic bags, as it was increasingly becoming a threat to the environment, Andrew could envision the rise of paper bags, which would pose no harm to the ecosystem. He started making paper bags with business experience he’d gained from the program of Junior Achievement (JA) Company called Quapack, where, whilst still a high school student, he worked as a financial manager and learnt how to make paper bags and envelopes.

In 2010, he worked on his start-up Youth Entrepreneurial Links Investments (YELI) while he was still struggling to deal with adversity of his family and pay off his own school fees. He carefully made a business plan for which he needed 36,000 Ugandan Shillings to make it to run. To meet his financial requirements, he collected 70 kilograms of wasted water bottles and could raise only 28,000 Ugandan Shillings. He borrowed the rest 8,000 Ugandan Shillings from one of his teachers. His company YELI became the first Ugandan registered envelope and paper bag manufacturing company. Roadside sellers, Local hospitals, retail stores, supermarkets, and local flour manufacturers are basically his customers. Since he began his company his business has grown extensively.

By the year 2012 he started producing over half a million paper bags and yet he believed ‘it was just the start’ and had to go a long way ahead. Today YELI produces more than 20,000 paper bags each week with its 16 employees and he aspires to employ 60 people by 2015. His company YELI was the recipient of a 2.6 million Ugandan shilling ILO business plan competition and in 2012 he won the $30,000 Anzisha Prize for young African entrepreneurial leaders.

“My dream is to eradicate polythene bags that are consistently posing danger to our environment and have a cleaner Africa. I also dream of having a big plant so that I have enough paper bags to supply all over Africa” Andrew Mupuya