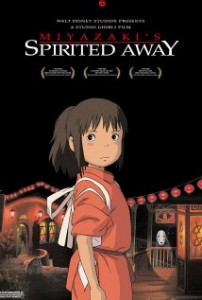 Spirited Away is one of the world’s most successful animated fantasy movies directed by Hayao Miyazaki and produced by Studio Ghibli in 2001. The movie, according to IMBD, grossed over $274 million worldwide.

The movie revolves around an arrogant and sullen young girl Chihiro who gets sidetracked while travelling along with her parents towards their new home and takes a wrong turn to an ominous-looking dirt road that leads them to an entrance of a discarded amusement park. The wonderful temperament, appealing weather, dry river and some old weird and abandoned houses nearby the park trigger her parents to wander around and explore the place more, which ultimately gets them to one of the restaurant stalls piled up with various delicious foods awaiting to be served with no workers or customers around. They get tempted to have them despite the warning of their daughter Chihiro. After failed attempts, Chihiro leaves her parents to fill their stomach and goes off to discover the mysterious park where she meets the boy master Haku who immediately warns her to depart the place with her parents before the dark. But unfortunately the darkness of night prevails and shadowy spirits fill the park. She runs towards the restaurant and finds her parents to be converted into large pigs. She screams for her parents everywhere but are nowhere to be found. With hopeless heart of not getting her parents back and fear of being caught, she tries to run away from everyone’s sight and hides behind the wall where she finds herself to be becoming transparent with the growing night. All of a sudden, master Haku returns to her and instructs her how to rescue her parents. Here the real journey of restoring her parents from pigs to the former-self begins. The fight seems to be challengingly tough against the powerful faceless creatures and strange looking inhabitants of distressing spirit world. She starts and keeps fighting against the all odds, winning the heats of even evil spirits and monsters with her humble attitude and generosity until she rescues her parents and her friend master Haku who assists her throughout the adventurous and dangerous journey. 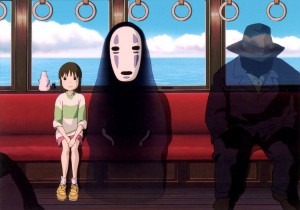 A Solitary Journey to Save Master Haku

When the story begins, Chihiro is a morose, whiny, girl who complains about almost everything around but on the completion of her mission she transforms into a brave, strong, and confident girl who knows her way to life. Her qualities – lack of greed, respect for elders, compassion toward others and perseverance helps her to complete a seemingly impossible journey.

Some of the Life Lessons to Learn from the Movie are:

1.“Expose yourself to your deepest fear; after that, fear has no power, and the fear of freedom shrinks and vanishes. You are free.” Jim Morrison

Chihiro was undoubtedly frightened for being among the eccentric creatures of ghostly world at initial stage but when she learnt that her fright would not help her parents to transform to human, she suspends her vanity of fear sincerely. Once she was exposed to her deepest fear, she felt free from strong negative emotions and got the real perspective of the world which helped her to bounce back and take on the real struggles of life.

In real life, we all are in the same situation. The fear – what if I fail? or what others will think about me? never let us come out of our deepest fear. So get up and Face your fears one by one; they will never dare to frighten you anymore.

2. Never be Motivated by your Greed

Throughout the journey, Chihiro was primarily motivated by the purpose – rescuing her parents from the spell of the magical world – not by the greed which immensely impressed the Faceless monster named No-Face (one of the guests to the bathhouse and evil mistress of the magical world Yubaba). With respect and love, No-Face spirit offered her gold and when she didn’t even seem bothered about having it while every inhabitant was running behind him to serve in order to have more gold, it motivated him to accompany a good soul and have her attention. 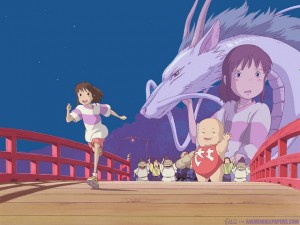 3. Help others on their Purposeful Journey to the Destination

On her Journey she helped every spirit in need. On the first day of her service at the bathhouse, she encounters white faced spirit ‘No-Face’ standing outside and getting drenched in the rain. She politely asks him to come inside and keeps the door open. Her concern for a stranger and the act of kindness compels the monster to develop a liking for her. She doesn’t hesitate to clean a horribly-smelling spirit when everybody else denies touching him. The river spirit presents her a magic herbal cake in reward for her altruistic assistance. She doesn’t leave Haku (a flying dragon of the magical world) alone while he is attacked by birds and gets seriously injured.

When you help people around with your generosity and tenacity, people feel the gratitude to help you back even if you don’t ask for.

4. Show your Gratitude and Say Thanks to the People who have Ever Helped you in Anyway

Chihiro shows her gratitude to everyone who assists her in anyway regardless of how they receive it. She thanks to No-Face monster for his little help, Haku for being a true friend, witch Yubaba (who stole her name, and threw her into series of troubles despite her humble nature) for letting her go with her parents.

5. Determination is the Key to Success

Haku informs Chihiro that she is supposed to find a job anyhow at the bath house to restore her parents. When she goes to the boiler man Kamaji (a six-armed cantankerous fellow) with a compassionate heart and asks for a job, she is refused to be given any responsibility, But when Kamaji finds her to be determined and firm, he finally appoints her. When Chihiro is sent to the witch Yababa to finally grant the permission, she is insulted, neglected and intimidated to leave without having a job but she stands unmoved and passes some of the most difficult tests with her perseverance. Her patience pays off. 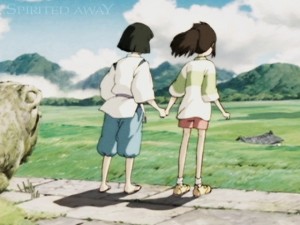 6. Keep Faith in your Action Irrespective of the Outcome

Faith is the most important ingredient of every successful event! When Chihiro goes to Zeniba (twin sister of the witch Yubaba who is the mistress of the bathhouse) with a faith to save the injured Haku, Zeniba tells her to remember any previous connection to Haku to save his life. After several honest attempts, when she gives up and starts crying for being unable to rescue her parents and her true friend, Zeniba consoles her by saying “Wait, just a little bit longer”. At last she recalls her connection with haku and thus saves hers as well as haku’s life.

Sometimes, all we need is to save our faith for an extended period of time to get the work done. When something seems to be unworkable, have faith for a little bit longer, your faith will certainly make it work.

7. Don’t Accept anything for Free; Such Things don’t Last Longer

‘No Face’ spirit offers gold nuggets to the greedy staff including the evil mistress Yababa. They all feel proud of possessing such invaluable gifts without much working for having it. In the end when Yababa tests the pile of free gold, suddenly they all turn into ashes.

Don’t be content with the precious gifts you have received without working hard for having them. They are illusionary and treacherous and can betray you at any point of time. In the movie, No-Face lures everyone with gold, at the same time he fails to attract Chihiho. She doesn’t accept his offers as she finds no logical reason or necessity for having them and she never regrets.

You may also like to read:
10 Life Lessons to Learn from Kung Fu Panda