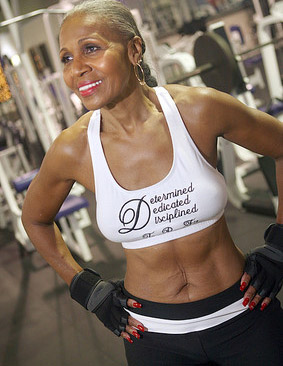 Ernestine Shepherd was declared to be the world’s oldest competitive female bodybuilder by the Guinness World Records in 2010 and 2011. She started bodybuilding and weight lifting at the age of 56 and after some some months, she included long distance running in her daily routine. Today, at the age of 75 she feels stronger and more energetic than she felt at the age 40. In 2011, in an interview with AOL Weird News she said, “Age is nothing but a number… I feel younger now than I did 30 years ago.” The secret of her success in shaping and maintaining such a wonderful body doesn’t lie in health supplements; but it’s the habit of having a balanced diet, running 80 miles a week, working hard and positive attitude that keep her going. She does not believe in taking pills, she says, “If there was ever an anti-aging pill, I would call it exercise”. She takes 1,700 calories a day that consists of vegetables, brown rice, chicken, boiled egg whites, and a liquid egg white drink.

Ernestine Shepherd had been a long time model in Baltimore but with the growing age when her figure went out of shape she, along with her sister Mildred Blackwell, joined weight lifting and aerobics classes immediately and competed in bodybuilding shows under pseudonym Velvet, and Ernie. In 1992, after the sudden demise of her sister in brain aneurysm, she felt depressed, quit exercising and started suffering from high blood pressure, acid reflux and frequent panic attacks. It was her close friend who initiated and encouraged her to start her career in bodybuilding to show the respect to her late sister. Her fresh start rewarded her not only with medals and bodybuilding titles but with a happy family that consists of her 80 year old loving husband, 53-year-old son, and 14-year-old grandson.

Ernestine Shepherd is one of many such examples that compel us to start believing in ourselves. It’s never too late to have a wonderfully fit and fine body even at the age of 75. We often think that we are too old to accomplish what we want to but in reality we always have enough time in hand. All we have to do is ‘Stop procrastinating and START DOING’.