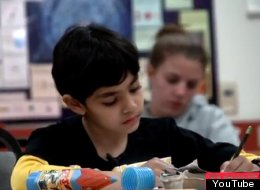 Tanishq Abraham, a 9 year old Indian-origin American child prodigy, looks like any typical child of his age. But his intelligence, thinking and understanding are far higher and profound than the children twice of his age. He joined Mensa International, the biggest and oldest high IQ society in the world, at the age of 4 by scoring 99.9 percentile. His younger sister Tiara is no less than him; she also scored 99 percentile in Mensa’s standardized IQ test.

Tanishq was born in California, USA, in 2003 to Bijou Abraham & Dr. Taji Abraham. His father is a software engineer and his mother is a doctor of veterinary medicine. Tanishq and his sister showed their extraordinary intelligence right from the early age. At the age of 2, Tanishq could easily count to 100, and very soon he started solving hard mathematical problems and his high intellect and understanding made it impossible for him to adjust with his fellow school students. Finally, at the age of 7, he was allowed to attend American River College in California where he wrote essays about astronomy that was published on NASA’s Lunar Science website. Apart from taking classes, he occasionally gives presentations and lectures on the subjects such as astronomy, palaeontology, and dinosaurs. Particle physics, anti-matter, the fate of the universe and the Big Bang are some more of his favorites.

Both siblings’ stories has been featured America’s national as well as international news media including CNN, FOX, ABC, MSNBC, Huffington Post, Yahoo, and more. Besides his academic achievements, he is also the youngest TV medical reporter for a national syndicated show ‘The Doctors’ CBS. Both siblings Tanishq and Tiara are equally interested in taking parts in extra-curricular activities including soccer, swimming, gymnastics, dancing, and art classes.