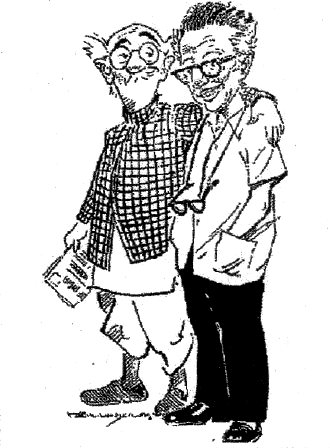 Popularly known for his ‘Common Man’ satirical cartoons, which started appearing in The Times of India since 1951, R.K. Laxman has lived a life one can envy.

Being a self-taught artist, he was lucky to have discovered many things by himself in an atmosphere free of hurry and worry. It was only because of the liberal nature of his parents that Laxman could turn out to be what we know him today as. This is also reflected in the life and works of R.K. Narayan, his elder brother and author of the popular Malgudi Days among several others.

Receiving the Padma Bhushan and being awarded the Ramon Magsaysay award (1984), Asia’s top journalism award, hasn’t made much difference to his view towards life: a healthy irreverence for everything under the sun and curiosity about the contradictions in daily life.
Here are some lessons which life of R.K. Laxman presents us with.

1) Ordinary is wonderful: As a child Laxman lived a life full of adventures in the ordinary activities of daily life. What gave him joy was doing what he pleased and satisfying his fancies: collecting all sorts of objects including spare parts of bicycles, empty chocolate boxes, broken toy cars and keeping them in a box reserved for later use. He liked looking around through broken pieces of coloured glass, living on the mango trees during summer with his brother and of course drawing on the floor and walls whatever caught his attention.
He entered formal education late considering the norm of those days. Later he became fond of his school to an extent that went there even on Sundays, only to return home finding it closed! Joy isn’t tomorrow or in the exclusive.

It is the depth of observation which separates two people with similar academic qualifications. We act on the basis of what we observe: looking at the various views of a situation and finding the best way out.
R.K. Laxman was fond of looking at things for the pleasure of it. One of his favourite subjects was crows. He found many similar qualities in humans and crows: their cleverness and cunningness. An incident which he frequently narrated was a period in his school one day when the teacher asked everybody to draw a leaf, which he did so well that the teacher’s words of appreciation came as a surprise. To him it came naturally as he observed them everyday strewn on roads.

With information being showered onto us from all kinds of mediums in the digital world it is a challenge to develop a keen sense of observation.

3) Life is more than a career: Being a world famous cartoonist, having travelled to many nations, meeting writers and artists of international stature and a rewarding career of more than fifty years didn’t tempt him to limit his activities to cartooning. Among his passions were writing short stories, essays and books, travelling to various parts of the world, fascination for machinery which included repairing old alarm clocks.

4) Setback doesn’t mean sit back: It is generally difficult to believe that those who experience success in all its grandeur would have ever failed in their life.
R.K. Laxman failed in his matriculation examination in his mother tongue and his application for admission into the prestigious Sir J J School of Arts, Mumbai was rejected saying that he possessed no talent for drawing!

5) Sense of bonding: An awakened sense of connectedness can make a difference to our daily life.
Laxman had a strong bonding with his family, especially with mother. His friendship with H.K, a childhood friend, paints this quality quite well. They entered the primary school on the same day and sat together through formal education. One day, to his dismay, H.K. never met him, as they regularly met in the evening after school, but was seen wandering around with another boy. Few days passed and Laxman approached them as if nothing had happened and formed a jolly trio.

Today this common man called R.K. Laxman lives at the ripe age of 92.