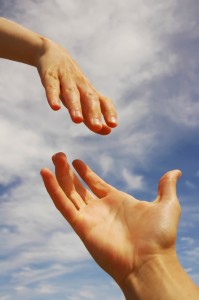 Reitesh worked with me in an IT firm. We often gathered for our usual, mostly droning, discussion and he would often vent out his frustration at being underpaid and would sight instances of other organizations paying much better to professionals with the same experience.

A part of me perceived that he was one of those self-obsessed guys, whom I always meet in abundance, guided only by the craving to mint money.

Reitesh was gathering money for an expensive luxury car which he wished to buy since long. He was euphoric.
“Come next month and I will possess my dream car,” he said unable to hide his excitement.
As fate had it, just a few days before he planned to buy his dream car, his mother was diagnosed with Cancer. Speculating the cost involved in such treatment, he had to put his much cultivated plan on hold.

Just about that time, all the employees of our organization received a mail from the Human Resource department attracting attention to the quandary of one of the sweepers in our office whose three years old son was diagnosed with blood cancer. As the poor father was unable to bear the cost of such an expensive treatment, the Human resource department requested the employees to contribute- if willing.

Our project members decided to contribute as per an individual’s wish and ability, and assigned a person, Suresh, to collect money and maintain a “contributor’s sheet” to track the amount collected, and finally hand-over the amount to the HR department.

In a week a substantial amount was gathered and coincidentally some project assignment brought me to Suresh’s cubicle.

My roving eyes fell on the “contributor’s sheet” which Suresh was updating at that time. The names in the sheet were arranged in the descending order – the person whose names appeared at the top was the one who contributed the most. I was pleasantly surprised to find Reitesh’s name on the top of that list. He contributed more than half the total amount gathered in a group of about twenty people!!!

A few days later, while talking with Reitesh, I suddenly revealed that I saw his name at the top of that list.

Taken aback and astonished as to how I came to know the details of that so-called “contributor’s sheet”, which was supposed to be not made public, he said-
“As you know I did not buy the car, which I was planning to, due to mother’s treatment. After consulting my near ones I decided to go for Ayurvedic treatment for my mother as it is not as harsh as Chemotherapy which, I presume, my mother won’t be able to sustain. But since the Ayurvedic treatment is much cheaper; so I gave away a part of the money to an NGO that raises fund for the poor children battling cancer.”
“My dream car can wait, but the treatment of the poor child cannot, “he added.

Reitesh, since then, has become a person whom I look up to – he is not just another salary-driven professional after all.