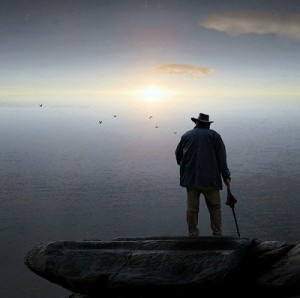 I have a photograph of my dad which I made sure could never escape my notice: I had set it as a laptop and desktop background and also on my mobile handset screen. I clicked that photo when my dad was at his hospital bed – undergoing treatment for advanced stage gall-bladder cancer; appearing extremely lean, weak due to multi-organ failure as a result of chemotherapy. I took the snap just a few days before he passed away. That photograph was heartrending enough for any human soul as it depicted my dad in an extremely feeble state, with saline connected to his body and respiratory pipes on his nostrils.

“Why do you sadden yourself by looking at this photo?”
“Do you not want to rekindle the happier days you had spent with your father?”
“Replace this photo by one which reminds you of the better-off days that you shared with your Dad.”

These were the remarks which I received from my friends who uttered them, on seeing this photo, with the noblest intention in their heart. I never doubted them –but then something inside me told that this photo of my dad was worth beholding every day I wake from my bed.

If I can put it that way, my dad had a sort of phobia towards photography-precisely he used to get irritated whenever asked to pose for a photo.

“These are all nuisance,” he would rebuke us.

On persistent persuasion however, he would oblige and sometimes, even managed a smile; but those were rare to come by and the odd smiling photos that we have of our dad are those which were taken in our family outing when he used to be in his paramount mood.

This particular photo was taken when the doctor, who came to examine my Dad, asked me to accompany him outside, and to my dismay, told me (with a grim face) –

“His days are numbered…”

Shocked and helpless as I found myself then, the only thing that occurred to me was to take a snap of my dad on my mobile camera.

Forgetting my inhibition –considering his apathy towards photo- I pleaded my dad to look up to me so as to enable me take his snap.

To my gratitude, he even got up and sat erect, which he managed after a bit of struggle and of course without showing any signs of his habitual tantrums. He even tried to smile for me. He obliged me when I least expected …when he was struggling for his life. I did take the snap and knew that my dad has done his last bit which he thought he could do for his son: me.

I often stare motionless at this photo because it conveys me much more than what meets the naked eye…it tells me about doing something for our loved ones even if we are least comfortable…it exudes compassion and hope .And yes, it is my inspiration.