“Courage is not the absence of fear, but rather the judgment that something else is more important than fear.” ~Ambrose Redmoon 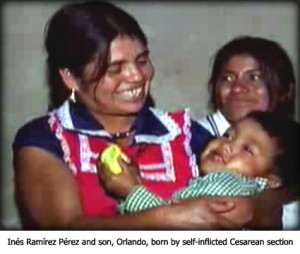 It takes great deal of bravery and immense courage to go beyond your fear to accomplish what you want. Ramírez Pérez is such a woman who set the brightest example of courage, endurance and compassion.

Inés Ramírez Pérez, a 40-year-old (now 52) Mexican woman from the state of Oaxaca, became the symbol of incredible courage when she successfully performed cesarean section on herself in March 2000. She is the only known person in human history to accomplish the impossible task without having any medical training or assistance. It is a testament to her resiliency and grit that Ramírez not only succeeded to save her baby’s life but fought for her own life as well.

She lived in rural Rio Talea, Mexico with least opportunities where only one telephone was available for 500 inhabitants and the nearest midwife center was over 50 miles away over bumpy landscape and jagged roads. She gave birth to eight children among which seven survived and the last one died during labor and she didn’t want to lose the baby she was pregnant with. When her labor started, she was alone in her cabin in Rio Talea, Southern Mexico and she had no help during the crucial time. After 12 hours of consistent pain and least or no advancement in labor, she decided to operate on herself. Sitting on a bench, she assumed birthing position and cut through her skin in a 17 centimetres in vertical lines at the right side of naval with the 15 centimetres kitchen knife after having three small glasses of hard liquor. It took approximately an hour she could reach to her baby and after taking her baby out and separating the umbilical cord with a pair of scissors, she lost her consciousness.
The pain was unbearable! She recounted her experience to the reporters and said, “I couldn’t stand the pain anymore, “And if my baby was going to die, then I decided I would have to die, too. But if he was going to grow up, I was going to see him grow up, and I was going to be with my child. I thought that God would save both our lives.”
After hours when she regained her consciousness she used clothes to bandage and prevent the bleeding and sent out her older son Benito for help.

After seven hours, village health assistance reached and sewed up the seven inch incision with a needle and thread and she was taken to the nearest local clinic in San Lorenzo Texmelúcan, which was two and half hours away, in a small bus. She received basic medical attention and was transferred to San Pedro where she underwent another surgery to repair the damage of her intestine during her own operation.

Inés Ramírez Pérez was discharged from the hospital after two weeks with the baby and she has been doing fine ever since.