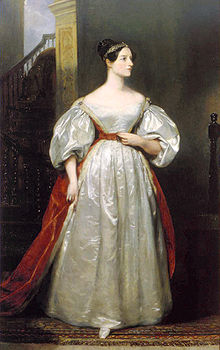 How many of us know that Ada Lovelace was the World’s First Computer Programmer? She wrote the world’s first computer program in 1842, several decades before the computer was developed.

Her interests and training:

Ada was an accomplished mathematician in the era when educated women were rare. She was the daughter of the poet Lord Byron who recognized her great aptitude for mathematics at the very early age. She was provided tutoring from a renowned researcher and scientific author Mary Somerville who later introduced her to the reputed English mathematician Charles Babbage in 1833. Babbage was the first person who conceptualized a programmable computer. The famous mathematician and logician Augustus De Morgan was one of her late tutors who praised her excellent command over mathematics and believed that she would be someday called “an original mathematical investigator, perhaps of first-rate eminence.” His prediction was true.

How was it possible to write a computer program in the mid-1800s if there were no computers?

During early-1800s Babbage considered designing a machine for doing a variety of mathematical calculations with precision to get rid of human errors. Babbage’s earliest design of “computers” were incomplete and did not run on electricity. Some of them ran on steam and some others required to be hand cranked to turn the thousands of gears and parts. Babbage’s first machine was called “Difference Engine” and was made up of over 25,000 parts weighing over fifteen tons. But he couldn’t complete its construction. Next, he attempted to build several designs with modifications and improvement with various capabilities. Much later, Babbage started designing a more complex machine for accomplishing more difficult task and named it “The Analytical Engine”.

Between the year of 1842 and 1843, Babbage asked Ada to translate the work of a renowned Italian mathematician, Luigi Menabrea, on Babbage’s Analytical Engine, the machine which was an important step towards the development of computers. It was the design of a mechanical general-purpose computer and looked pretty near to the modern computer. While translating the work, Ada augmented the information as well as a set of notes and methods for calculating certain numbers with the Babbage’s Analytical Engine. The engine was recognized as the world’s first computer program by historians. These notes were published in The Ladies’ Diary and Taylor’s Scientific Memoirs under the initialism “AAL”. The computer programming language ‘Ada’ is still used in some aviation and military programs and has been named after her. After one hundred years, in 1953, her notes were republished.

Her description of a computer and software made early model for computer. Her notes on an algorithm for the analytical engine to compute Bernoulli numbers were alphabetically published from A to G. It was the first most significant algorithm ever written for the implementation on a computer. Interestingly, she also was the first lady to foresee that this Babbage’s computer would someday be used for other non-mathematical purposes for example music. However, Ada couldn’t complete her work during her lifetime.