Adam Somlai-Fischer is a multifaceted personality with a distinguished career in Architecture and Visual Arts. He has spent over a decade creating innovative technologies such as DIY Smarthomes, and reality interfaces. One of his most notable creations is Prezi, a Cloud-based Presentation Software, which is widely used for exploring and sharing ideas on a virtual canvas.
Adam was also the co-founder of Kitchen Budapest, a media lab for young researchers who aspire to create innovative technologies in the fields of mobile communication, online communities and urban space. 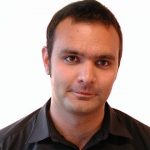 The Making of Prezi

According to the website of Prezi, Adam hand-coded his first Prezi in 2001. In his words, “I created Prezi as a personal tool to develop my ideas by seeing relations, big picture, and then focus the attention of the audience by creating a visual journey.”
He realized that a Zooming User Interface allowed him to explore the “big picture” overview of an idea and then zoom in so that the audience could have a better view as well as details. Since there were no Zooming Presentation Editors at the time, Adam started coding them all by himself. As of now, he has created over 1500 Prezis and has been actively involved in developing the technology, making it more usable and viable.

In 2007, a professor named Peter Halacsy from Budapest University of Technology, convinced him to develop a publicly-available ZUI editor, to which Adam readily agreed. The same year, they recruited a third entrepreneur named Peter Arvai who joined them as CEO and prepared the marketing and promotional plan for the ZUI editor. In April 2009, Prezi was officially launched and soon it was funded by TED Conferences and Sunstone Capital. The company first started from Budapest and the same year, in November, it opened another office in San Francisco.

How Prezi Changes the Way of Making Presentations

How Prezi changes the way of making presentations from Conference Basics on Vimeo.