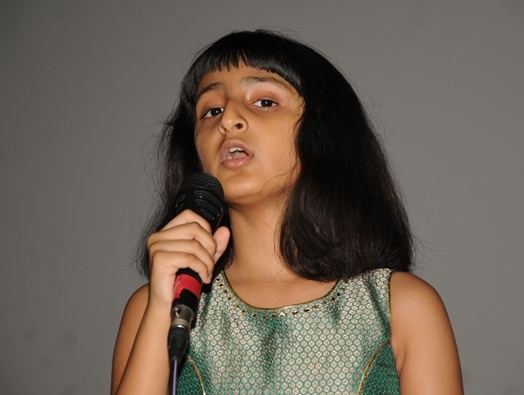 Nine-year-old Aditi Iyer first started humming tunes when she was barely 18 months; and in less than a year, she mastered almost all nursery rhymes. By the time she turned 4, she started showing immense interest in learning difficult Western songs of legendary singers, and because of her photographic memory, she learnt many of them.

By the age 6, Aditi showed signs of serious talent and people started calling her a gifted singer. And, when she was gifted an ipad, she started teaching herself classical and contemporary Western songs of singing legends — Celine Dion, Whitney Houston and Sarah Brightman.

The student of Excelsior American School, Gurgaon, Aditi was spotted by the noted vocalist, Jyotsna Rana and was invited to perform before a gathering of achievers on Women’s International Day 2013 at Artemis Auditorium in Gurgaon. She sang ‘Power of Love’ to welcome Padma Shri awardee, the renowned Shanti Hiranand. She was invited once again at the Artemis Auditorium to sing a welcome song for Rishi Nityapragya (direct disciple of Sri Sri Ravi Shankar, Founder of the Art of Living Foundation). This was attended by over 500 people.

For the last two months, Aditi has been learning opera from the very respected and renowned voice trainer, Situ Singh Buehler (considered by many to be the senior most opera teacher in the country). Aditi was chosen by Situ and is her youngest-ever student.

She has an official Youtube channel , which has received an overwhelming response, appreciation and positive comments from many musical experts and singers around the globe. Her channel has gained about 700 subscribers and over 120,000 channel views in about 5 months. She can also be reached at her Facebook page.

Experts (both operatic and others) have appreciated Aditi’s singing voice with eulogies such as ‘beautiful and powerful voice, ‘great throw and pitch’, ‘an opera voice with great breath control’, ‘versatile voice’ and ‘nice vibrato at just eight years’.

I Will Always Love You’ – Whitney Houston – Aditi Iyer