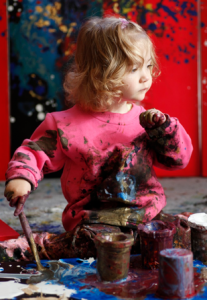 A five year-old Australian child prodigy Aelita Andre has received wide attention and recognition across the world after her abstract artwork fetched $24,000 in exhibitions. In 2009, at the age of 2, her solo show was held at the reputed Brunswick Street Gallery in Melbourne, Australia and surprisingly all of her works were featured.

When she was not even two, her works were shown as part of a group to the BSG gallery director Mark Jamieson. Her mother didn’t reveal the true identity of the artist and what happened next surprised everybody. Seven of the fifteen paintings were sold btween $300 and $3000 even before the show started. She immediately became a known figure.

From the very early age, Aelita developed her passion for painting and ever since she has been experimenting a lot. The sheer interest and pleasure, unique style and love for textures and colors are prominent in her eye soothing and heart touching paintings. The mixing of a verity of colors and textures and expressions to make striking chaotic panorama is so distinct that attracts people in split seconds. Her talent and expressive art has been praised by the art critic of “The Age” newspaper as well as Associate Professor at Melbourne’s Monash University, Robert Nelson. She is expert in different paintings that range from aquatic style to alien landscapes, the milky-way and planets, cosmic galaxies, aerial mapping techniques, to abstracted animals and creatures.

Apart from painting, she takes interest in gym, ballet, piano, violin, and singing. She enjoys dinosaur documentaries of BBC and the Carl Sagan Cosmos series and many other things.