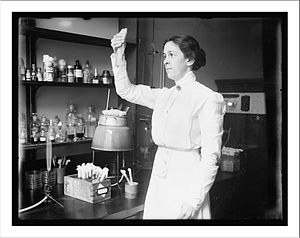 Alice Catherine Evans was an American scientist who discovered a rare form of bacterial infection that caused undulating fever in humans. In 1918, she confirmed that a group of bacteria bacillus abortus were the reason behind Brucellosis, a common disease in cow. She also confirmed that it was transmitted to human body through unprocessed milk and emphasized on milk pasteurization.

Evans was born on January 29, 1881 at a farm in Neath, Pennsylvania. She attended the Susquehanna Institute in Tonawanda where she studied for one year and then started teaching at a local elementary school. In 1909, she completed her B.S. in bacteriology from Cornell University and finished her M.S. from University of Wisconsin–Madison on scholarship in 1910 and became a researcher at the US Department of Agriculture where she researched bacteriology in milk and cheese. She didn’t go for a doctoral degree because of extreme involvement in her own research and made the significant discovery on the subject scientists overlooked for centuries.
Evans was laughed at by several renowned Bacteriologists, Researchers, and veterinarians for not having a Ph.D. and was severely criticized for her involvement in Bacterial Pathogenesis Research. However, she remained unfazed by her critics and continued collecting reports of Brucellosis found in human bodies from worldwide countries and concluded that the disease was more widespread than she had predicted. Moreover, she drew the attention of two forms of the disease: acute and chronic. In acute disease, the symptoms could be easily identified but in chronic disease, the symptoms would grow over the years.

Her dedication to research got her worldwide fame and scientists agreed to her conclusion in the late 1920s after which the U.S. government brought in the milk pasteurization law. Her contribution saved several thousand lives across the world.

Evans had several attacks of this disease during her experiments but she survived and lived a very significant life. She died at the age of 94 on September 5, 1975 in Alexandria, Virginia. Her discoveries earned her several awards; she was the first female president of the Society of American Bacteriologists. In 1934, she was bestowed with an honorary degree in medicine by Woman’s Medical College of Pennsylvania; in 1936, she was awarded the honorary doctorates of science by the University of Wisconsin–Madison and Wilson College.