“No matter what accomplishments you make, somebody helped you.” Althea Gibson 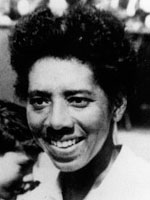 Althea Gibson was born on 25 August, 1927 in Silver, Clarendon County, South Carolina. She was the first African-American to win a Grand Slam in 1956 and widely acclaimed for her “serve and volley” style of playing.

Althea started her sports career with billiards and basketball. At the age of nine, on the advice from a Police Athletic League supervisor, she started playing tennis. Within six years, she became the New York Black Girls’ Champion. Her success brought her the scholarship for the Florida and Mechanical University.

At the beginning of her early career, she played in the completions that were held by the American Tennis Association. However, in 1950, she became the first African American player in the National Tennis Championship and after one year, in 1951, she was invited to play at Wimbledon. She also became the first African American player to play in the tournament. The same year, she was ranked among the top ten female tennis players in the world.
In 1956, she won French Open and the US Open; and in 1957 she won singles in Wimbledon. She remained among the world top ten tennis players from 1956 to 1958. In 1964, she became the first African American woman who successfully played in the Ladies Professional Golf Association. In 1977, she took retirement from the professional golf. She held numerous significant government athletics positions in New Jersey from 1975 to 1992. In last few years, she suffered from financial as well as health problems and refrained herself from public life. In 2003, she died in East Orange, New Jersey at the age of 76.

She became an iconic figure, when black athletes were facing bitter racial discrimination and denied to enter country clubs and hotels, she broke all the barriers. Today, most of the best women athletes take her name for their prime inspiration.