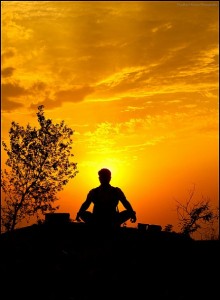 The evolution of human beings on Earth is a fruition of a Natural process based on material effects that developed our mind up to the mazes of passion, raising our vitality and revelation, faster than other spices of this planet. Within the dynamic process of Nature, we evolved step by step according to our contemporary needs. Our mental potency had improved as our inherited system of thoughts on basis of fear and passion, thereafter it was our fear that created the basis of communities and civilizations, but our passion that evolved for their own excellence always ignored the basis of civilizations, and their triumph of brutality became a most important part of our genetic nature. Whenever our fear and passion failed to achieve its goal, our spiritual potency emerged within the process of our evolution creating the basis for incarnations, according to the needs of their own period. The evolution of the minds in majority were based on materialism, that instead of following the spiritual potency always used their potentials of mind to gain the terrestrial bliss. Rarely were they very few of them in the history of mankind, who evolved their own spiritual potency for philanthropic purpose and were able to achieve the fame of divinity to civilize the communities on basis of peace and solidarity.

The incarnations in our existence encouraged the spiritual potency to evolve within the rules of revelation, but the potentials of mind in mazes of terrestrial needs, emerged with its mass figure as science. Now it is raising high up to the infinite cosmos, ignoring the basis of spirit and constructively navigating our existence towards an unnatural end. Thus at this current period it is an essential liability of the world literate community to reveal these dark aspects of our evolution, among public at large to secure the safety of our future generation on Earth.

It is the biggest question of this current period, unfortunately ignored by the large majority of the intellectual communities, that perplexed in mazes of religious boundaries or rapt to achieve the material excellence beyond the natural process, disgracing the verve of spiritualism. No doubt, today our fear existing behind the dark aspects of our evolution have created many destructible weapons, which might destroy this planet more than our imagination. So to secure our existence, we will have to enlighten these dark aspects of our evolution, right up from the period of our origin on this planet according to both theological and scientific insight.

According to our religious points of views and scientific insight, we were one of the most innocent creatures of this planet at its origin era. Science (Darwin theory) insist, the existence of mankind as metamorphosis of an innocent creature that evolved with the Natural process according to its terrestrial needs. This theory eliminates the theological definitions and yet it not capable to clarify the participation of spirituality in our evolution. Actually our theological explanations about our origin on Earth are quite different from each other, but there is a similarity within their points of views and that is “Incarnation of human beings on Earth were as divine diligent creature, during its evolution those who evolved following the potentials of spirit, gained the fame of divinity, and those who evolved on basis of fear and passion neglecting the graces of spirit emerged as an existence of Satan. Fear and passion are the basis of our negative attitude, that cripples the verve of spirituality, and both of these intangible aspects are the parts of our one existence that evolves around the mazes of materialism. Innovation of mind (science) is unanimously accepted by all of us, but the graces of spiritualism are separated within its definitions. The positive aspects of our evolution has innovated the terrestrial objects for philanthropic purpose, and the negative aspects hidden behind fear and passion have innovated the lethal objects to force us to an unnatural end, disgracing the path to peace.

At this current period, it is essential for the world community and the leadership in ministry to meditate for a fresh method that would equip the dark aspects of our material evolution to secure our safety on Earth. To solve the complexities of these issues, first of all we will have to explore beyond our genetic nature and the inherited system of thoughts that separated in mazes of theological definitions and silently opposes the scientific explorations and even the explanations of other religious views. And thereafter this method will help us to bring science and theology together approaching all of those who are searching their safety under the shadows of Nuclear weapons and innovating against the Natural process. Theological graces are the basis of our morality and the sources of our safety are based on science. Though the scientific achievements are unanimously accepted by the entire mankind, but the theological definitions in mazes of culture and religious tradition appears as an obstacle on the path to bring science and theology together that would define the science and theology together for this philanthropic issue. Thus to bring science and theology together, first of all we will have to unify all the religious points of views in one idea within scientific insight.

With the psychological evolvement of a mankind at childhood, the insight of theology, culture and tradition enthralls their mind and spirit on basis of morality. Thereafter symptom of their genetic nature appears in the attitude, just before the commencement of their juvenescence. Between the period of childhood and juvenescence, the scientific achievements cripples the verve of their morality and appears as the inherited system of their thoughts that determined to obtain whatever is possible for their terrestrial bliss and safety. After the period of juvenescence, when a mankind enters in mazes of the liabilities for terrestrial life embroiled within professional issues, their tendency of belief and attributes begins to fall in thralldom of science, ignoring their own theological definitions. Here the verve of spiritualism is crushed between materialism and religious tradition. Thus the assumption or belief on God in the mind of a mankind falls in duality and changes the meaning of God teachings into a subject that can be used for political, communal and terrestrial issues, navigating them to supremacy and salvation from terrestrial agonies. At these circumstances, the failure of belief falls in mazes of vanity creating basis of fanaticism and barbarism. So the roots of belief that emerge from the dept of the spirit as moral concept had always suffered in their terrestrial life, ( as the son of God or as the last messenger of God or as the incarnations from any religions ) on the path to sanctify the dark aspects of our evolution.

Now when the potentials of our evolution have raised its fame up to the infinite cosmos, our leadership in ministry is encouraging the science to innovate lethal weapons for our safety, only because of our separation in religious boundaries that disgracing the moral concept to achieve terrestrial bliss. The entire world is aware of the oncoming juncture, but still we are helpless in thralldom of premeditated mythical theories. Many individuals and organization are working out to reach the proper solution, but their efforts are going in vain, because our current inherited system of thoughts and genetic nature never allows one to bring science and theology together out of their determined realm.

Though fresh innovation needs an end, but still a hope is alive as “John Templeton Foundation”. The great vision of Sir John Templeton was to bring science and theology together, to accept the challenges of constructively transforming our intellectual life on path to peace, but we are just leaping with the topics like the study of freedom or question of secularism and changing the mind of academy. In fact, without approaching the graces of literature, the efforts to get the solution of these essential issues are somewhat bizarre. There is no any other way for the world community to survive from the dark aspects of our evolution, but still we have enough time to meditate and elaborate the sacred potentials of literature that would bring changes in the inherited system of the thoughts of the juveniles, without disgracing their belief and faith. Literature is not only a subject for entertainment; even it is the basis of enlightenment that needs the excellence as science. I have put lots of efforts to promote the positive aspects of literature as an essential need of this current period and I believe the world community will approach it as new spiritual information to equip the issues on path to peace.