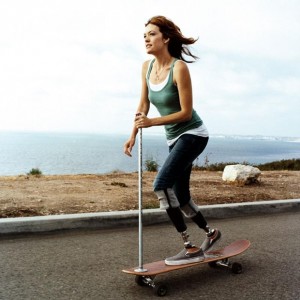 Amy Purdy’s story is incredibly inspiring! It is about how to make our life purposeful and worth living and not to bind ourselves with the biggest disability –limitation. It is about what should be the purpose of life – Living for the sake of living or showing others how to live a meaningful life, breaking all our confinements and boundaries.

Amy Purdy is a competitive snowboarder, massage therapist, motivational speaker, spokesperson for the Challenged Athletes Foundation and the co-founder of of Adaptive Action Sports. At the age of 19, a rare form of bacterial meningitis named Neisseria meningitis snatched her both legs below knee, damaged her circulatory system, and affected left hearing. That was not the end of her tragedy, after a few weeks one of her kidneys had to be removed. Two years later, she received a kidney transplant from her father.

A Series of tragedies left Amy Purdy with chronic depression for some period of time but she neither gave up nor let the cruel circumstances beat her illimitable spirit. Amy accepted the tyranny of reality but resolved to live beyond limitations. She started snowboarding seven months after she received her prosthetic legs. She joined snowboarding competition within a year since her legs were amputated and came in third place. Soon, Amy received a grant from the Challenged Athletes Foundation that helped her to take part in several snowboarding competitions held across the U.S. Today, she is known as the world champion female adaptive snowboarder. In 2005, she co-founded Adaptive Action Sports to help physically challenged people to take part in action sports.