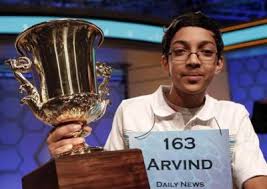 Thirteen-year-old Indian-American boy Arvind Mahankali from New York has won the title of the Scripps National Spelling Bee for the year 2013. It wasn’t the first time for Arvind, in his three previous attempts he performed well but got eliminated in the final round. He finished ninth in 2010 and third in the following years of 2011 and 2012. On the announcement of German-derived word ‘knaidel’ in the Scripps national spelling bee’s final round, Arvind had the same deja vu that hit him twice in previous consecutive years when he was eliminated in the final round upon given the German derived words. “It was a wonderful moment when the German curse has turned into a German blessing” he expressed his excitement on being announced the winner.

Arvind is the sixth successive Indian-American winner and the 11th in the past 15 years, a trend that started with Nupur Lala when he won the title in 1999 against an Indiana speller David Lewandowski. Nupur Lala was featured in the documentary ‘Spellbound’, a documentary directed by Jeffrey Blitz.