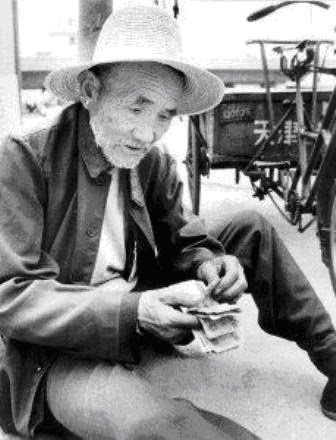 Chinese pedicab driver Mr. Bai Fang Li touched the hearts of millions by his ‘story of selfless giving’, lightning up the world of ignorance and showing the ray of hope to those who can’t afford education.

In 1987, at the age of 74, when Bai Fangli finally returned his hometown retiring from rickshaw pulling career, he was deeply saddened to see the poor children working at the fields instead of going to school. Soon he realized that there was no way these children could be sent to school. Regardless of his old age and failing bones, Fang Li plunged into the job again in Tianjin with a new vigor to help children furthering studies. He consistently worked hard till 2001 without any considerable rest, sometimes 24 hours at a stretch, ate simple food (sometimes discarded foods thrown away by people), wore old and torn-up second-hand cloths to save maximum money to pay the installment for the school fee and buy education for more children.
He continued helping them with a noble mission, “I really want them to study hard and sincerely to get a good job, and become an honest person to give back something to the country.” He finally retired at the age of 90 after paying his last installment (of total 350,000 yuan) to the school and in 2005 at the age of 93 he died.

For 2 decades Fang hardly bought any cloths or a pair of shoes for himself, in his words: “I can hardly remember of buying any clothes for me. If you notice my clothes, you would easily identify that they all are ‘throw away cloths’, my shoes are also different and picked up from various places, even the socks I wear inside are unlike! and my hat was also collected from dump sites.”

His daughter summons up, “He has struggled and suffered almost all his life to saving on food and drinks, stitching his tattered pants repeatedly until they were completely ragged or torn-up. If you throw away his old cloths and pants and buy some new ones for him, he certainly gets angry for wasting money on buying thing for him.”

‘Love is holy and unconditional, not judged or determined by the one being loved, highly accommodating and above all it is never swayed by time or circumstances’ which has been finely exemplified by Mr. Bai Fang Li who touched the hearts of millions of people with his inspiring legacy, selfless devotion, tremendous amount of wisdom and emotional support to hundreds of poor and deprived children.