“A love for humanity came over me, and watered and fertilised the fields of my inner world which had been lying fallow, and this love of humanity vented itself in a vast compassion.” – Georg Brandes 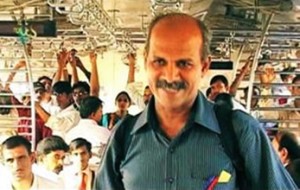 In the peak of office hour amidst the overwhelming crowd in a local train, a profound voice goes high repeating the words: “Vidya daan sarva sreshtha daan aahe (Donation towards promoting education is the greatest donation).” Middle-aged Sandeep Manohar Desai, an ex-marine engineer and professor at a renowned management institute in Mumbai, has been traveling to and fro in Mumbai’s suburban trains holding a begging bowl in his hand for the last 3 years. Through fluent English and Hindi speech on how the tiniest contribution of all can make a considerably significant difference for the deprived, destitute and helpless slum children, he initiates commuters to make a decent donation. At an average, he collects approximately Rs 3,000 every day. He receives from Re.1 to Rs. 1,000 donation without being contempt or disrespectful towards anyone’s ability to contribute. He adds “I want every Indian to be literate equally for our country’s progress and advancement” to his speech to motivate the commuters. Begging on trains is a punishable crime for which one can be imprisoned for up to one year with an additional fine; however, his noble intention as a responsible citizen hasn’t dimmed or crushed. He continues dedicating himself for the cause and to a greater extent he has succeeded. His success was also bolstered by the Bollywood actor Salman Khan who arrived to meet him hearing his altruistic social service. Once he called on his mobile and requested commuters to help him for his cause. According to the professor, it significantly raised the amount of his donation. In 2011, he has raised Rs. 21 lakh.

Professor Sandeep’s selfless contribution earned him name as well as respected titles including IBN18 Real Heroes Award for 2011 in education and children category, the Zee Marathi Ananya Gaurav recognition and the respect conferred by the Rotary International.