“Helping Innovative Ideas Get off the Ground 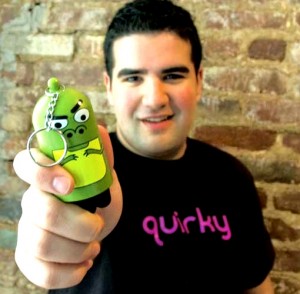 In 2009, Ben Kaufman founded New York based an online consumer products company Quirky with social development strategies. It is a platform where inventors, hobby explorers, students, as well as design enthusiasts can submit their product ideas and concepts which are voted by people. The most voted two popular ideas are sent to in-house team of engineers, consequently passed on to designers to research and make a prototype. Quirky does the initial funding and marketing. If the idea works, then the person behind the idea and the contributors who actualize it receive up to 30% future revenue.

With its distinct concept, Quirky became the first company to rewards contributors’ accomplishments with cash payment and the first ever company to take the fresh ideas into development process. In April 2010, RRE Ventures funded Quirky with $6 million. Quirky products are accessible in top retailers including: Toys “R” Us, Target, Bed Bath & Beyond,OfficeMax, ACE Hardware, The Container Store, and Amazon.com.

Ben Kaufman, the founder and CEO of Quirky, calls it a mission to change the way people think and interact with their ideas. Ben’s entrepreneurial journey started whilst he was still a high school student. To assist his parents in paying off their mortgage loan, he started a an iPod accessory company, Mophie. It was an instant success and won the “Best of Show” at MacWorld 2006.

Over the years, Ben has been featured in hundreds of newspapers and magaznes which include the New York Times, USA Today, New York Observer, Business Week, WIRED and Entrepreneur. He regularly appears on Television networks including CNBC, FOX Business News and The Today Show. In 2007, Inc Magazine named him among the top entrepreneurs under the age of 30.