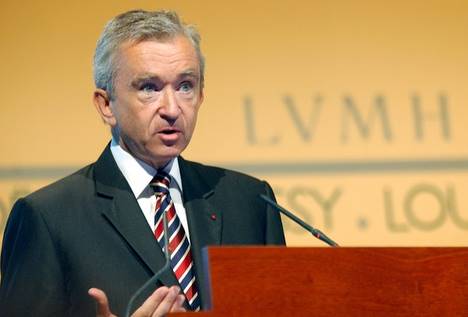 Bernard Arnault, a French business man, founder and CEO of LVMH and chairman of Christian Dior SA, and Group Arnault, was born on 5th March, 1949 in Roubaix, the north of France to an entrepreneur family. He completed his graduation from Maxence Van Der Meersch high school after which he once again attended École Polytechnique to complete his engineering degree. In 1971, after completing his studies, he joined his father’s construction business firm. He supervised Ferret-Savinel and built time share on the French Riviera. In 1981, when French Socialist came into power, he moved to United State along with his family. After two years in 1983, when the political atmosphere ameliorated, he returned to his country and became Chief Executive Officer of a luxury goods company, Financière Agache. He owned a struggling textile company, Boussac, with the help of Government Subsidies and Banque Lazard Investment firm’s managing diractor Antoine Bernheim to make his strong presence in Luxury market. After few times, keeping Le Bon Marché department store and famous Christian Dior brand with him, he sold major portion of his company and invested the major chunk of money in purchasing 24% share of LVMH. Finally in 1987, he took over the company and changed the old conventional trends and his flock of innovative ideas and tireless energies made him infallible king of fashion world. In 2007, through one of his enterprises Blue Capital, he shares his ownership with California Property Firm Colony Capital, acquired the World’s Second largest Food Distributor Carrefour and 10. 69% Franc’s Largest Supermarket Retailer. His son Antoine, 32, and daughter Delphine, 34 are member of LVMH’s board.

He purchased many of the luxurious brands such as TAG Heuer, Givenchy, Sephora and many more throughout the 1090’s for which he was often criticized but stood still to expand his business and financial security.

He is the France’s richest man who owns world’s largest fashion and luxury brands.
In 2007, Time Magazine kept him among the 100 most influential people across the world. According to Forbes Magazine 2010, he is the 7th richest man whose net worth is $27.5 billion.

“In the coming five years, there’ll be activity in the luxury world and we’ll be there,”

Working in the context of ultra-famous brands like Dior and Vuitton, creative spirits are always going to feel reined in. It’s important that they are free to develop ideas. And rather than detracting from the principal job, it reinforces it. I think of that money as venture capital. It’s not a big investment.

“Ï feel very proud because we worked so hard to create it – and proud for France because everything is made here.”