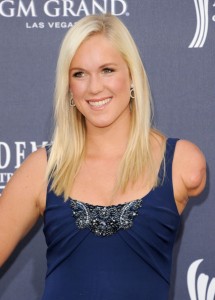 The story of an American professional surfer Bethany Hamilton truly motivates us to do our best with whatever we have. Her success story is self-evident that disability can’t prevent us from accomplishing our dreams. Dare to overcome it and it will soon be your past. Despite having lost her left arm in a shark attack, she returned to surfing in less than a month.

It was an October morning of 2013, the 13 year old Bethany Hamilton was surfing along with her best friend Alana Blanchard and her family. Suddenly a 14-15 foot long tiger shark emerged from nowhere and, in matter of seconds, chopped off her left arm. Somehow, with the help of Blanchards, she managed to swim back to the shore and survived. After spending a month in hospital, she got back to surfing and continued preparing herself for the tough competitions ahead.

In 2004, she received the Best Comeback Athlete ESPY Award and was awarded with a special “courage award” at the 2004 Teen Choice Awards. In 2005, in the National Scholastic Surfing Association (NSSA) National Championships she took 1st place. After this big achievement, in 2008, she started competing full-time on the Association of Surfing Professionals (ASP) World Qualifying Series (WQS) and she took the second place in her first competition against the best women surfers of the world. Hamilton has appeared on several popular shows including Good Morning America, The Ellen DeGeneres Show, Inside Edition, 20/20, The Oprah Winfrey Show, The Today Show and The Tonight Show. She described her story through a book, Soul Surfer: A True Story of Faith, Family, and Fighting to Get Back on the Board, which was published by MTV Books in 2004.

“Courage, sacrifice, determination, commitment, toughness, heart, talent, guts. That’s what little girls are made of; the heck with sugar and spice.” Bethany Hamilton