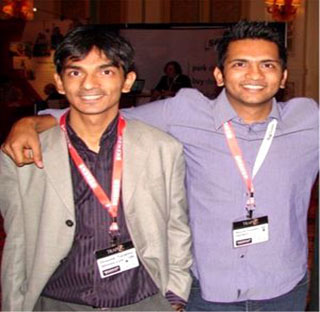 Bhavin Turakhia (born on December 21, 1979) and his brother Divyank Turakhia (born on January 29, 1982), who are widely known as the first Indian Internet Entrepreneurs, started their journey by founding an Internet and Web hosting company ‘Directi’ in 1998 with a humble investment of Rs. 25,000, the money that they borrowed from their father. With the money, they first bought the company’s first server and chose a 630-square-foot space in Andheri, Mumbai where they started working with four members. As of 2011, the company was estimated to be worth $350 million with over 550 employees and offices in Mumbai, bangalore, Delhi, China and United Arab Emirates.

LogicBoxes provides technology as well as consulting solutions to domain registrars across the globe. As of February 2012, it has over 6.5 million domains hosted on its server.

WebHosting.info is known to be the largest statistical data provider in the web services industry. Its patent awaiting algorithm supervises approximately 1.3+ million DNS servers, more than 35 million domain names as well as around 2 billion IP addresses. Skenzo is for domain advertising and assisting business by monetizing. CodeChef organizes coding and programming competition in India with more than 30,000 users.

In 2005, Bhavin Turakhia won the Bharti Entrepreneur of the Year Award and 2011, he was titled as the Young Global Leader by World Economic Forum. He has been invited as guest speaker in colleges, entrepreneur and technology conferences across the India and various significant events including The Great Indian Developer Summit, Management Conclave, SiliconIndia Start Up City and HeadStart and Compute.

In the year 2010, Bloomberg magazine featured Divyank as a “Winning Warrior”. In 2008, Financial Express called him one of India’s “New Business Leaders”. and In 2006, BusinessWeek Magazine featured him in the list of Asia’s Top Young Entrepreneurs.

Both the brothers have been profiled in reputed mainstream newspapers including the Education World, Hindustan Times, The Sunday Guardian, The Times of India, The Financial Express, Kolkatta Mirror, Forbes India and many more.