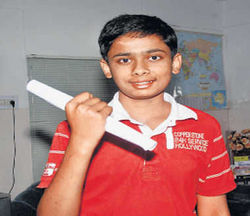 Satyam Kumar, a 12 year old child prodigy, has surprised the whole country by cracking one of the most toughest and prestigious entrance exams IIT-JEE. From the very early childhood, he has been passionate about studies and showed his talent when he passed 10th exam the age of 10. His 12th class result is still awaited. He qualified from Mumbai Zone by securing an all India rank of 8,137. The entire villagers of Bakhorapur, a small village in Bihar’s Bhojpur District, has celebrated his success with crackers and sweets.

He was born on July 20, 1999 to an illiterate farmer father Sidhnath Singh and mother Pramila Singh. His father says “He used to impress everyone with his talent even when he was barely five years old” and his talent compelled them to send him to Kota, Rajasthan for higher education. Satyam’s father is very proud of his accomplishment but he will not join IIT this year because of his poor marks. Satyam wishes to sit for the second time next year for a better rank. He aspires to develop a software company.

In 2006, Bihar Chief Minister (CM) Nitish kumar had honored him with the award “Bihari Ho to Aisa”. According to reports, the State Govt. is now planning to honor the little master by making him the ‘Brand ambassador for Education in Bihar’.