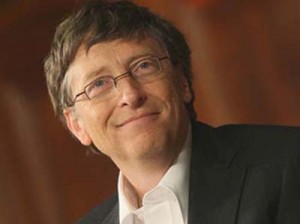 William Henry Gates, an American businessman and chairman of Microsoft, was born in 1955, on 28 October in Seattle, Washington. He came from upper middle class family; his father was a lawyer. From his childhood, he had a great interest in programming. He is the second son of his parents. He has an older and a younger sister.

In 1973, he completed his graduation from Lakeside school and sat for the SAT in which he scored 1590 out of 1600. The same year in 1973, he enrolled at Harvard University where he made friendship with Steve Ballmer, who later became CEO of Microsoft from 2000, and Paul Allen with whom later he created new version of basic programming languages for Altair 8800, first personnel computer. Later, Bill Gates dropped the idea of furthering his studies and concentrated on his new business.

In 1975, Bill Gates launched Microsoft and within the next few years, it changed the entire computer world. In 1980, IBM and Microsoft became partners and they developed MS-DOS, the first IMB personnel computer, which was also the first breakthrough for both the organizations. Microsoft announced Window 1.0 in 1983 and after two years in 1985, the first retail version of Microsoft windows that he developed with IBM came in the market. In coming years, Microsoft started closing the deal of developing new operating systems which led to their separation in 1991.

Bill Gates spent the subsequent years developing newer versions of Operating System, Windows 2.0 and Windows 3.0. By the end of 1994 Microsoft sold over 10 million OS copies across the world. It encouraged Microsoft for developing Windows 3.1 and 3.1, Windows 95, 98, 2000, Windows XP and current version of Vista and Windows 7.

Microsoft has successfully expanded its centers in 85 countries across the world and employs over 55000 employees. According to Forbes 2012, Bill Gates is the world’s second richest entrepreneur with the net worth of $61 billion.

In 2000, Bill gates, along with his wife Melinda Gates, established Bill and Melinda Gates Foundation which is one of the largest charitable foundations in the world.

In 2007, he was ranked as the second most active and generous philanthropist by contributing $28 billion to the charity

By the age of 31, Bill Gates became the youngest billionaire ever in American history

In 1994, he was chosen to be the twentieth Distinguished Fellow of the British Computer Society. He received honorary doctorate degree from several renowned universities, in 2000, Nyenrode Business Universiteit,Breukelen, The Netherlands; in 2002 from the Royal Institute of Technology, Stockholm, Sweden; In 2005 from Waseda University, Tokyo, Japan; in 2007 from Tsinghua University, Beijing, China; in 2007 from Harvard University; in 2008 from the Karolinska Institutet, Stockholm; in 2009 from Cambridge University. Besides, he was made an honorary Knight Commander of the Order of the British Empire by Queen Elizabeth II, and in 2007 he was made an honorary trustee of Peking University.

In 1994, Bill Gates was awarded with CEO of The Year by Chief Executive Officer Magazine. In 1999, Bill gates was in the power list of Sunday Times.

In 2006, he was honored with the Order of the Aztec Eagle for his most generous contribution in health, and education

In 2010, he is to receive 2010 Bower Award for his achievement and business leadership of The Franklin Institute

I think it’s fair to say that personal computers have become the most empowering tool we’ve ever created. They’re tools of communication, they’re tools of creativity, and they can be shaped by their user.

I’m a great believer that any tool that enhances communication has profound effects in terms of how people can learn from each other, and how they can achieve the kind of freedoms that they’re interested in.
Information technology and business are becoming inextricably interwoven. I don’t think anybody can talk meaningfully about one without the talking about the other.

It’s fine to celebrate success but it is more important to heed the lessons of failure.

At Microsoft there are lots of brilliant ideas but the image is that they all come from the top – I’m afraid that’s not quite right.

As we look ahead into the next century, leaders will be those who empower others.