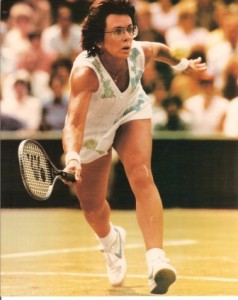 In 1961, she first played at Wimbledon as a young tennis player with the name of Billie Jean Moffat. Her aggressiveness on the tennis court made her favorite of her audiences. Billie once said, “Tennis is a perfect combination of violent action taking place in an atmosphere of total tranquility.”

In total, she played 265 matches for 23 years in singles, doubles as well as mixed doubles at Wimbledon. During her career, she represented herself as the strongest female tennis player and kept campaigning for the recognition of female tennis players. In 1990, Life Magazine enlisted her as one of the “100 most influential Americans of the 20th Century”; in 2009, she was awarded the Presidential Medal of Freedom; and in 1994, she was ranked No. 5 on Sports Illustrated’s “Top 40 Athletes” list for her significant contribution to tennis. After retirement, she has been actively working for GBLT and promoting Gay and Lesbian rights in the United States. She’s also associated with the Women’s sport foundation as well as the Elton John AIDS campaign.

“I will tell you King’s First Law of Recognition: You never get it when you want it, and then when it comes, you get too much.”

“Women’s sports is still in its infancy. The beginning of women’s sports in the United States started in 1972, with the passage of Title 9 for girls to finally get athletic scholarships.”