“I have a belief that life isn’t about balance, because balance is perfection … Rather, it’s about catching the ball before it hits the floor.” ~Carol Bartz 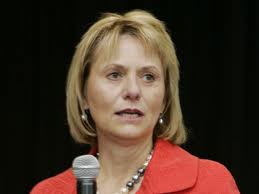 In a career that spans near four decades, Carol Bartz has served several reputed companies of Silicon Valley with her talents and enthusiasm to make the most of her experience. She worked at Digital Equipment Corporation and 3M Corporation in sales and management positions, did jobs in different positions at Sun Microsystems and Digital Equipment Corporation and was Chairman, President and CEO of an American engineering and architectural design software corporation Autodesk for approximately 14 years until 2006. Bartz has been a member of the United States President’s Council of Advisors on Science and Technology and has also served on boards of directors at Cisco Systems, Intel, Network Appliance, BEA Systems, and the Foundation for the National Medals of Science. On January 13, 2009, she became the CEO of Yahoo! and resigned from the position on September 6, 2011.

Carol Bartz was born on August 28, in 1948 in Winona, Minnesota to Shirley Ann and Virgil Julius Bartz. She spent most of her childhood with her grandparents after her mother died when she was eight years old. She did considerably well in mathematics in her high school. In 1971, she completed her bachelor degree in computer science from the University of Wisconsin–Madison. She started, from her early college days, to support her brother and herself by working as a cocktail waitress. Throughout her career, she faced discrimination on various fronts but she never broke down and dared to remain progressive in her life.

Her long-term contribution in technology earned her several titles and awards. In 2002, she was awarded an Honorary Doctorate of Humane Letters degree by New Jersey Institute of Technology, an honorary Doctor of Letters degree from William Woods University and an Honorary Doctor of Science degree from Worcester Polytechnic Institute. In 2001, she was awarded with the Ernst & Young Entrepreneur Of The Year© Award and in 2005 she was enlisted in the List of The World’s 100 Most Powerful Women by Forbes Magazine.