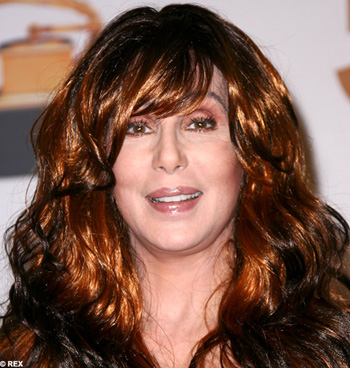 American singer, actress, as well as famous television personality Cherilyn Sarkisian, Popularly known as Cher, is often regarded as the Goddess of Pop and is the only personality to receive three Golden Globe Awards- first in 1974 for The Sonny & Cher Comedy Hour, second in 1984 for motion picture Silkwood and third in 1998 for Moonstruck; an Emmy Award in 2003 for The Farewell Tour; a Grammy Award for Best Dance Recording in 2000 titled Believe and the Best Actress Award at the Cannes Film Festival for her contribution in film, music as well as television. Cher started her career as a singer then became famous as a television comedian and later evolved as a talented actress.

Cher was born on May 20, 1946, in El Centro, California to John Sarkisian and Georgia Holt. Her father was a truck driver and mother was an aspiring model and actress. She started her career at the age of seventeen with the initiation of crooner and music promoter Sonny Bono. She became a global face with the release of the duet song with Sonny Bono “I Got You Babe” in 1965 and ‘The Beat Goes On’. They got married the same year in 1965 and lived together till 1974. On separation, Cher started her career as a solo recording artist and recorded a series of commercially hit pop albums.
She pursued her acting career in the 1980s and appeared on Broadway in Come Back to the Five and Dime, and Jimmy Dean in 1982. She won a Golden Globe Award for The Sonny and Cher Comedy Hour after which she did several hit movies including The Witches of Eastwick, Mask, Silkwood, Suspect and Moonstruck, for which she won the Academy Award for Best Actress. In 1998, she came up with her album ‘Believe’ which became the biggest selling album ever of her entire career and this single remained number one in the charts for seven weeks. Cher launched ‘The Farewell Tour’ in June 2002 and traveled the world for almost three years, earning close to $250 million.

The farewell program was nominated for six Emmy Awards among which it won three. She holds the Hot 100 record for the longest hit throughout her long 40 years of career and has successfully sold over 100 million records worldwide. In 2008, Cher once again returned to the stage at Caesars Palace in Las Vegas and continues her performance till date. In 2010, she appeared on big screen as Tess, the owner of a club, in the hit musical ‘Burlesque’ and has recorded two new songs for the movie, ‘You Haven’t Seen the Last of Me’ and ‘Welcome to Burlesque’. She again won the 2011 Golden Globe Award for Best Original Song.

Besides being a popular singer, actress she is also known to be a fashion icon and trend-setter who popularized long straight hair, exposed midriff and bell-bottoms. She is the first woman to show her bellybutton on television. She is the inspiration for many famous celebrities including Jennifer Lopez, Oprah Winfrey, Cyndi Lauper, Britney Spears, Meryl Streep, Tracy Chapman, Christina Aguilera, Elton John and several others.

In 1999, Cher was ranked 43rd on VH1’s 100 Greatest Women of Rock & Roll poll. In 2002, she was among 26th Sexiest Artists on VH1’s 100 Sexiest Artists. She is called to be the third favorite actress of all time after Katharine Hepburn and Audrey Hepburn.