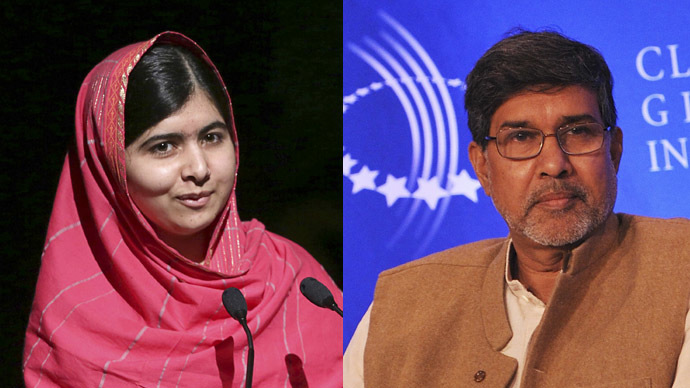 Indian children’s rights activist Kailash Satyarthi wins Nobel Peace Prize (2014) along with Pakistani teenager Malala Yousafzai. Since 1990s Kailash has been active in the movement of saving children from slavery, bonded labour and trafficking. His organization, Bachpan Bachao Andolan has saved more than 80,000 children from different forms of bondage and sent them to rehabilitation and education. He has campaigned on various social issues where children are involved, he has highlighted issues of illiteracy, poverty, unemployment, population growth and other serious social problems in front of the world. He is considered to be one of the significant figures mainly credited for endorsement and adoption of various national as well as international legislations, and treaties and the constitutional amendment on child labour as well as education.

Malala Yousafzai is a Pakistani education reformist activist who has already fought for the rights of girls’ education under the most dangerous and life threatening circumstances. She was shot by Taliban for the dare for which she remained unconscious and critical for several days. She was later sent to Queen Elizabeth Hospital in Birmingham where she fully recovered. On 12 July 2013, which is Malala’s 16th birthday, she spoke at the UN to call for worldwide access to education. The UN marked the event as the “Malala Day