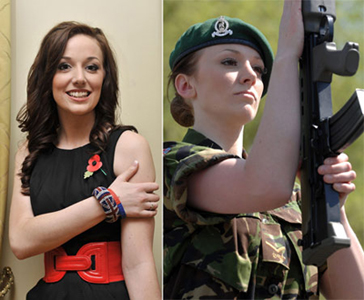 Corporal Katrina Hodge(Born 29 March 1987), who is serving the British Army from the town Royal Tunbridge Wells, rose to fame when she became the first woman ever from the British Army to participate and became Miss England in 2009. At the age of 17, She signed up for army to win the challenge with her elder brother. On successful completion of the training, Hodge was appointed by the Royal Anglian Regiment as a member of the Adjutant Generals Corps. She earned her nickname “Combat Barbie” from the time of her reporting to the Royal Anglian’s barracks in Winchester, Hampshire, while on duty, by wearing a kitten heels, false eyelashes and with her attire in a pink suitcase.

She first came into limelight in 2005 when her story of bravery, whilst working with the Royal Anglian Regiment in Iraq, was reported in British newspapers. After a road accident, when one of the prisoners attempted to run away, she fought and snatched two riffles from him by flooring him bare handedly, singlehandedly and slightest fear in her mind. She rescued the lives of her comrades. After this courageous deed, she was promoted to Lance Corporal.

In 2010, Hodge secretly married her fellow soldier, Neil and gave away the crown of Miss England. When asked why she was hurried for marriage; she replied that it was preplanned and added that she was least bothered about the glamour world. She preferred to return to her country and her family!