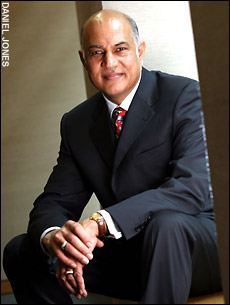 Kirit Pathak’s curry pastes, pickles and spices manufacturing company Patak’s is widely believed to be the largest Indian food factory in the world.
Kirit’s grandfather, L.G. Pathak was born in 1925 in Gujrat, India. His father was a poor farmer who couldn’t earn enough to support his family. In late 40s when his father died, L.G. Pathak decided to move to Kenya for better prospects. After a couple of years, in 1956, they had to flee to London with just £5 in their pockets from the hostile Kenyan regime and Mau Mau terror attacks. Back then, Kirit was about 6 years old.
On arriving London, LG Pathak and his wife Shanta somehow managed to rent a basement in Kentish Town. He started his new life with his first job as a street sweeper and later he set up a shop to sell samosas, and sweets in the street of Camden, in north London. In early days, Shanta would make sweets and snacks in her tiny 6ft by 5ft kitchen and the 7 year old Kirit would deliver them in nearby localities. Soon he started traveling across London as an errand boy. Since he could not speak English, he would keep two notes in his right and left pockets, one showing the address he was delivering food to and the other the address of his home. Kirit took charge of his father’s business at the age 17 and in coming years he turned the shop into a global curry brand that currently makes curry pastes, pickles, chutneys, naan bread and supplies necessary ingredients to the Indian restaurants in Britain. Today, the company employs over 700 people and sells its products in all continents. On 30 May 2007, Patak’s was sold to Associated British Foods for £200 million.