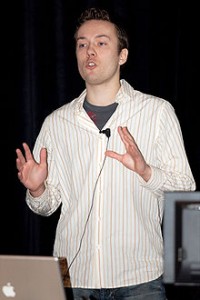 David Heinemeier Hansson is a Danish programmer and the creator of the popular web development framework, Ruby on Rails. Popular in Ruby Community as DHH, Hansson is also a best-selling author and the partner of the web-based software development firm named 37signals. In 1999, he created a Danish online gaming news website the Daily Rush community and ran it until 2001. On completion his graduating from the Copenhagen Business School with degrees in Computer Science and Business Administration, he came to Chicago in 2005 from Denmark.

According to Hansson, he began working on Rails in the beginning of 2004 and released it as an open source web application framework in the month of July, the same year.

In 2005 Google and O’Reilly honored him with the title ‘Best Hacker of the Year 2005’ at OSCON for his notable work on Rails and in 2006 he received the Jolt award of product excellence for Rails 1.0. He is the co-author of Getting Real that has been sold more than 40,000 copies and Agile Web Development with Rails with approximately 100,000 copies sold.

“Workaholics don’t actually accomplish more than nonworkaholics. They may claim to be perfectionists, but that just mean they’re wasting time fixating on inconsequential details instead of moving on to the next task.”
David Heinemeier Hansson,