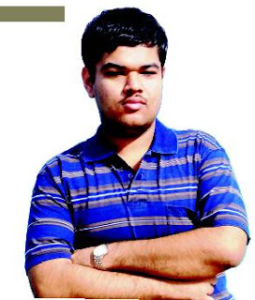 One can achieve unlimited abundance in every facet of life regardless of circumstances – physical challenges, difficulties, failures or set backs. Success isn’t anybody’s possessions; it can be attained by any determined man who makes consistent progress while passing through defeat, failure and despair. The 23-year-old blind student of IIT Kharagpur Pratish Datta is quite fitting example of it.

Pratish has enlightened his world of knowledge with the greatest driving forces – will-power and perseverance. He has won the gold medal at IIT Kharagpur college for his remarkable performance in Mathematics, received the Professor Jagadish Chandra Bose Memorial Gold Medal from President Pranab Mukherjee in 2012 and also awarded for his consistently best academic performance in the M.Sc courses in the science disciplines at the IIT.

He lost his vision at the early childhood after suffering from ‘retinoschesis’, a disease that causes blindness, in his early months after birth. When he was in class VIII, he was already very close to blindness and wearing the high-powered magnifying glasses. It was the time when his mother played a significant role by reading out his lessons to him. “The credit of his incredible success goes to his mother. He has also ranked second in the country in GATE this year. We are extremely proud of his accomplishments. My son has proved he is more and better than many” his father Prabir Datta was quoted saying.