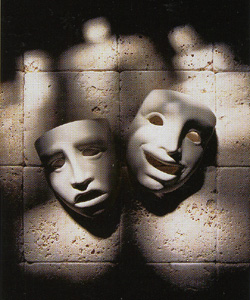 Evolution is a fruition of Natural process, developing our brain, better than other species on this planet. Our existence is a dynamic process of Nature (not human nature), which evolve according to its term. In fact, evolution is a creativity of nature, now improving up to infinite cosmos to explain human nature, but ignored by mankind exploring in realm of Natural process for philanthropy and even innovating destructible weapons for annihilation.

It is the principia of human nature, to obtain whatever is possible to gain opulence and excellence, just as the nature of other species far from beneficence of evolution. Our comprehensive power of innovation improved better and faster than other species, but the genetic effects of our origin era still exists as human nature enthralled in mazes of science and theological definitions. Now it is leaping with both positive and negative mentality, beyond the limitation of Natural process. Our positive mentality is the mass figure of evolution and the negative mentality represents evil according to religious point of view.

Science proves human being, a metamorphosis of a species as a part of Natural process, and religions with different definitions, proves the incarnation of human as divine diligent creature with potentiality to evolve. After approaching theological methods and science in one idea, to search out the relation between evolution and human nature, this evolution appear as Natural process teaching new born to breathe and thereafter with the growth of new born the rules of Nature are ignored by scientific and theological insight and our inherited system of thought, which appear as our nature, now making difficult to understand the explanations of evolution.

Explanations of evolution for human nature is clear and loud to warn mankind, not to cross the limitation of Natural process, making trust on nuclear weapons, now enough to destroy our existence. Though our science is developing fast to face Natural disasters similar to prehistorically era, but human isn’t cautious with tendency to understand explanations of evolution.

This big question is related to our activities during this period of Natural process in our existence. It is a clear instruction for literate community to make awareness of the lethal effects of global warming and Nuclear weapons, among public at large, by approaching scientific and theological insight in one idea, to equip the explanation of evolution for philanthropy.