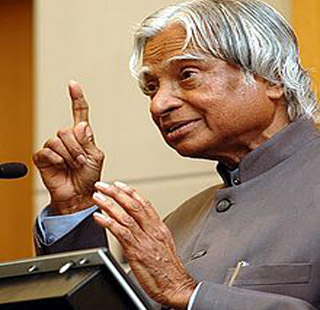 Dr. Avul Pakir Jainulabhudin Adbul Kalam, an Indian scientist, author, aerospace engineer, and 11th President of India, is widely known as the father of India’s missile technology. He is also known for his extreme simplicity, humble personality, motivational speeches, and friendly interaction with student communities across India and abroad.

He was born in Rameswaram, Tamil Nadu, on 15 October 1931 to a poor boat man Jainulabdeen and a housewife Ashiamma. Since his father could not earn much, Kalam started assisting him from early childhood. On completion of school, he distributed newspaper. He would get up early in the morning and rush to the nearest railway station to pick up the newspaper. Upon sorting them along with his uncle, he’d pick up his part and deliver them door to door.
Kalam was an average student in his school days; however, he was fascinated by rockets and had passion for mathematics. On completion his grad studies with physics as major from the St. Joseph’s College in Tiruchirappalli, and aerospace engineering from the Madras Institute of Technology, Chennai, he started his career with DRDO in 1958. He worked there for five years and moved to ISRO and became the Project Director of SLV. In 2002, he was elected as the 11th President of India.
Currently, despite the age of 80, he is a visiting professor at Indian Institute of Management Indore and Indian Institute of Management Ahmedabad; a professor of Aerospace Engineering at Anna University in Chennai, JSS University in Mysore; Chancellor of the Indian Institute of Space Science and Technology Thiruvananthapuram.

Kalam has always been vocal about a highly-developed India and wrote a book titled India 2020 in which he has outlined an action plan on how to transform India into ‘Poverty free’ nation and a knowledge superpower by the year 2020. He has always been an inspirational figure and idol for Indians. He was the pioneering figure behind developing many missiles such as Agni and Prithvi. His contribution and significance in defense technology and scientific research earned him several honors and awards including Padma Bhushan in 1981 and Padma Vibhushan in 1990; India’s highest civilian honor the Bharat Ratna, King Charles II Medal in 2007 by Royal Society, U.K; Hoover Medal in 2009 by ASME Foundation, USA; IEEE Honorary Membership in 2011 by (IEEE) The Institute of Electrical and Electronics Engineers and many more. Besides, he has received 40 doctorates from different reputed universities.

“The dream is not that you see in sleep , dream is which does not let you sleep.”

“God, our Creator, has stored within our minds and personalities, great potential strength and ability. Prayer helps us tap and develop these powers.”

“Look at the sky. We are not alone. The whole universe is friendly to us and conspires only to give the best to those who dream and work.”

“To succeed in your mission, you must have single-minded devotion to your goal.”

“Be more dedicated to making solid achievements than in running after swift but synthetic happiness.”

“Educationists should build the capacities of the spirit of inquiry, creativity, entrepreneurial and moral leadership among students and become their role model.”

“Those who cannot work with their hearts achieve but a hollow, half-hearted success that breeds bitterness all around.”

“Life is a difficult game. You can win it only by retaining your birthright to be a person.”