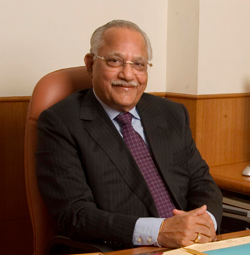 M.D, MBBS and entrepreneur Dr Prathap C Reddy is widely known as the founder of the first ever corporate chain of hospitals in India the Apollo Hospitals Group. He is credited for modernizing the private hospitals in India. In 1991, Prathap C Reddy was conferred with the Padma Bhushan and in 2010, with the second highest civilian award, the Padma Vibhushan for his important contribution in providing better health care system. He was also honored with ‘Life Time Achievement Award’ by Hospimedica International, Mother St Teresa’s ‘Citizen of the Year Award’, the ‘Asia Pacific Bio Business Leadership Award’ by the University of Southern California, and Modern Medicare Excellence Award by the ICICI Group for his commendable accomplishments in the healthcare industry.

On completion of his medical degree from the Stanley Medical College in Chennai, he went to UK and USA to be trained as a Cardiologist. Later, he completed Fellowship from the Massachusetts General Hospital, Boston and attended the Missouri State Chest Hospital where he led many research programs till 1978, after which he returned India. He felt the lack of modern and world-class health care system and felt inspired to set up something big and finally in 1983 he established the Apollo Hospitals in Chennai. His finest establishment inspired renowned medical talent from across India and from hospitals in the US and UK. The venture he started with a 150-bedded Hospital in 1983, persistently excelled and became one of the largest hospital group across the country.