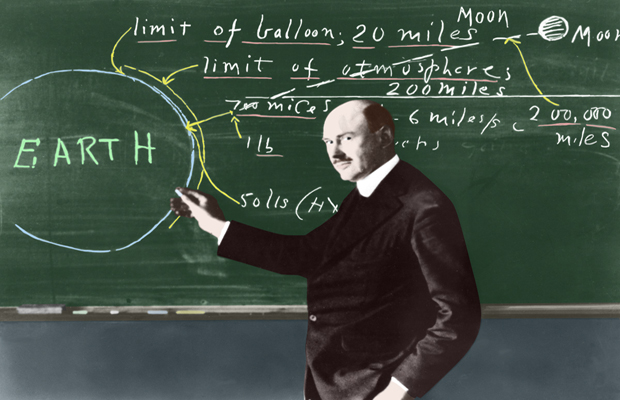 Dr. Robert H. Goddard, an American physicist and inventor, was responsible for building the world’s first liquid-fueled rocket and laying the foundation of today’s rocket and space travel. He was among the most talented scientists with profound knowledge of practical engineering and creative science and the first scientist who contributed in realizing the practical implementation and potentialities of space flights and missiles. He developed gyro control apparatus for rocket flight, invented pumps suitable for rocket fuels, explored the practicality of applying rocket propulsion to reach high altitudes and even the moon and many more in his lifetime.

During his professional career, he was heavily criticized and called an extreme with impossible attitude. In 1920, whilst being criticized by a reporter of The New York Times, he replied, “Every vision is a joke until the first man accomplishes it; once realized, it becomes commonplace.”

He never called his experiments as failures, he regarded them to be unsuccessful series that took him to destination successfully and without which he would never be successful, “It is not a simple matter to differentiate unsuccessful from successful experiments. . . .[Most] work that is finally successful is the result of a series of unsuccessful tests in which difficulties are gradually eliminated.”

Unfortunately, during his lifetime, his experiments were widely rejected calling them to be unrealistic and outrageous by his fellow scientists. They could not predict how significant his inventions were. His importance went unrecognized until ‘space age’ stepped into United States. His honors that he deserved far before were given to him much late. He dedicated his lifetime inventing and experimenting it. “It is difficult to say what is impossible, for the dream of yesterday is the hope of today and the reality of tomorrow.” — Dr. Robert Hutchings Goddard