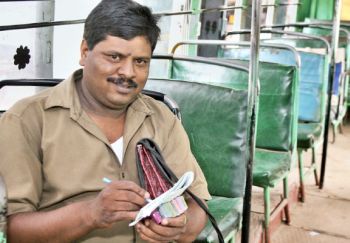 How often do you find people who toss aside personal interests as triviality to selflessly devote their whole life in making the world a better place, without any expectation of restitution for their altruistic efforts? A genuine environment enthusiast Marimuthu Yoganathan, a bus conductor by profession(also known as the Tree Man of the south), is one of them. He has planted over 120000 tree saplings single-handedly for over 25 years by putting 40 per cent of his salary towards this generous cause and encouraging others to plant. He knew that alone he could do the least; therefore, he involved people and visited more than 3000 schools and colleges of Tamil Nadu to raise environmental awareness.

From the very childhood, he would love watching beautiful nature, walking through forests and doing poetry sitting under the shades of the trees of the Kotagiri forests. He remembers his intolerance and intense protest towards insensitive elimination of the green cover in an interview with ibnlive, “I would go dead against senseless cutting of trees and would block the roads of lorries carrying the trees while living in Nilagiri. Back in 1987, lot of tea factories would hack down huge number of trees from nearby forest against which we staged tremendous protest against their actions”. He gets saddened recalling the days when Timber traders would beat him up and people would take fight with him for his good work. He remained unmoved for the hatred he received from some selfish people. His courage, focus, fortitude, and great sense of responsibility will continue to teach us the ultimate purpose of life – selfless service to the society, which unlocks the treasure chest of precious gift for you and me.

He has been honored with the tiltle ‘ Sutru Suzal Seyal Veerar‘ (Eco- Warrior) by Tamilnadu Government and with many other awards for his significant contribution to the environment.

“Dedicate some of your life to others. Your dedication will not be a sacrifice. It will be an exhilarating experience because it is an intense effort applied toward a meaningful end.” – Dr. Thomas Dooley