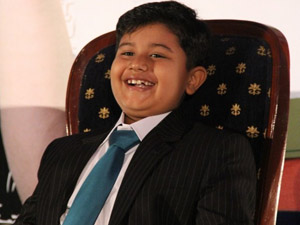 Pakistani boy Shafay Thobani has became the world’s youngest Microsoft Certified Professional (MCP) at the age of eight. He was born on March 13, 2004, in Pakistan. According to his father, he developed his interest in computers from the very tender age. His father stated “We would get him toys but he would be more attracted to my laptop. Then at the age of four, we gave him an old Acer laptop, a third generation hand-me-down after both me and my younger brother had discarded it”.

Shafay sat for the Prometric test and became the world’s youngest Microsoft Certified Training Specialist (MCTS) at the age of eight years and 24 days by successfully securing 91 per cent marks. He had also successfully completed Microsoft Hyper-V virtualization with 65 per cent marks. In addition, he is a certified professional in Microsoft Windows Server 2008 R2 and Microsoft Windows 7 Configuration. He has been under the training of Microsoft certified trainers for more than one year prior to attending the exam.

His family said that Arfa Karim Randhawa, who was the world’s youngest Microsoft Certified Professional at the age of nine, has been his inspiration. She became the Microsoft Certified Professional in 2004 the year Shafay was born. Unfortunately, Arfa Karim died at the age of 16 due to the complications from an epileptic stroke.

Team Success Stories congratulates Shafay Thobani on his brilliant achievement and wishes him the very best!