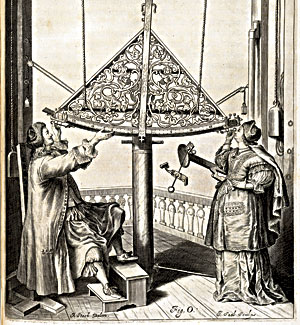 Elisabeth Koopmann Catherina Hevelius, a polish astronomer is considered to be the first female astronomer and widely known as “the mother of moon charts”. At the age of 16 she became the second wife of the councilor and mayor of Danzig (a Polish city presently known as Gdańsk) and renowned astronomer Johannes Hevelius, who was 52 years old. She was thirty six years younger than her husband but her marriage allowed her pursue her interests in astronomy.

Elisabeth Koopmann belonged to a rich merchant family from the city of Danzig and her family was a member of the trade organization named Hansa. After her marriage in 1663, she assisted her husband in managing his observatory in Danzig. In 1687 after the death of Johannes Hevelius, she continued her experiments alone and in 1690 their joint venture and research of finding 1,564 stars and their corrent positions was published in a Catalog titled Prodromus Astronomiae. Her contribution and significance has been recognized and novelized as The Star Huntress published in 2006.

The minor planet 12625 Koopman, which was discovered by Cornelis Johannes van Houten, Tom Gehrels and Ingrid van Houten-Groeneveld in 1960, has been named in her honour.