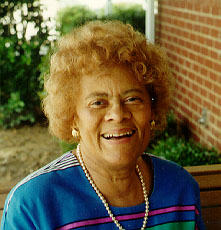 Evelyn Boyd Granville was one of the second African-American women to earn a Ph.D. in Mathematics in 1949 from Yale University and a pioneering figure behind developing the computer programs implemented for trajectory analysis in the Mercury Project, which was the first U.S. manned mission in space and in the Apollo Project, which sent U.S. astronauts to the moon. She is one of three African American women who have been honored by the National Academy of Science, and awarded honorary degrees by Lincoln University and Smith College.

Granville was born on May 1, 1924 in Washington, D.C., to William Boyd and Julia Walker Boyd. She was mostly raised by her mother and her twin sister Louise Walker who worked for the U.S. Bureau of Engraving and Printing. In 1941, she, along with her aunt’s financial support and a small scholarship from Phi Delta Kappa, got admission at the Smith College where she majored in physics as well as mathematics. She also showed her strong interest in astronomy. In 1945, on graduating summa cum laude she attended the Yale University where she received many scholarships and fellowships that included the Atomic Energy Commission Predoctoral Fellowship, Julius Rosenwald Fellowship and the Julius Rosenwald Fellowship.

In 1950, she joined Fisk University in Nashville, Tennessee as an associate professor. It was an only-for-black college. After two years, she left her job and went to work for the Diamond Ordnance Fuze Laboratories as an applied mathematician for four years. For next four years, from 1956 to 1960, she worked on the Project Vanguard and Project Mercury space programs for IBM after which she moved to Los Angeles and became a Research Specialist with the Space and Information Systems Division of the North American Aviation Company. After short interval, she returned to IBM with the positions of trajectory analysis and orbit computation. In 1967, she moved to California State University at Los Angeles as a full-time mathematics professor and in 1984, after her retirement, she joined the University of Texas at Tyler as professor and chair of mathematics. In 1990, she was appointment to the Sam A. Lindsey Chair at the University of Texas at Tyler and also continued teaching as a visiting professor.