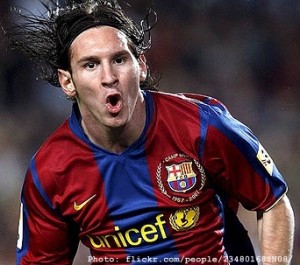 Argentine footballer Lionel Andrés Messi is one of the greatest and highest paid football players in the world with an estimated earning of $45 million a year. Currently, he is the caption of Argentina’s national football team and plays for FC Barcelona. Messi has achieved several titles and awards including the Ballon d’Or and FIFA World Player of the Year in 2009, FIFA Ballon d’Or, UEFA Best Player in Europe Award and several others. He has also made several records including the Most goals scored in a season in all competitions, Barcelona Record Goalscorer with 255 goals, Most goals scored in a single league season with 50 goals among countless other.

Like all great people, he was no exception of the hardships in his early life. At one point of time, he would serve tea at a shop to support his football training. Messi was born to a poor family in Rosario, Santa Fe Province on 24 June 1987. His father Jorge Horacio Messi was a factory worker and his mother Celia María Cuccittini would work as a part-time cleaner. His ancestors, who belonged to the Italian city of Ancona, immigrated to Argentina in 1883. At the age of five he began playing football for a local club Grandoli and he was coached by his father Jorge. Messi was diagnosed with a growth hormone deficiency when he was 11 years old. The disorder was treatable but the medicines would cost a staggering $900 a month, the amount his father was unable to afford. Popular as ‘The Flea’ for his diminutive stature, Messi soon came in the notice of the sporting director of FC Barcelona Carles Rexach in a trial match. At the age of 13, Messi was offered to play for FC Barcelona in Spain and in return he was promised to pay his medical bills. He moved to Barcelona where he got enrolled in the club’s youth academy. It proved to be a turning point in his life.

He drew worldwide attention and was compared with one of the former legendary Argentinean football players Diego Maradona for his unique technical skills and fierce style of playing. Maradona himself revealed his regard about his fellow countryman to the BBC, “I see him as very similar to me”. In 2005, he made his very first record by becoming the youngest player to score a goal for the franchise and in the same year, he led Argentina to the title in the under-20 World Cup. He debuted in 2006 World Cup as Argentina’s youngest player and became the 6th youngest goal scorer in the history of the FIFA World Cup.