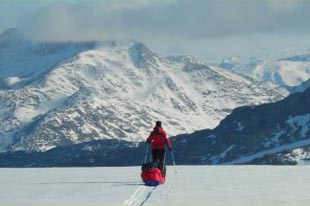 Felicity Aston, a 34-year-old British adventurer, is the first woman in human history to ski across the perilously icy continent Antarctica for 59 days alone. She covered 1,084 miles, which is 1,744 kilometers starting from the Leverett Glacier back in November without any human assistance, dogs, sails or kites except her own determination, dare and strength and it was her another record and achievement.

She kept tweeting her various moments of journey and feelings throughout her journey through her satellite phone. Hours before being picked up by the rescue plane, she tweeted, “The plane is on its way so these are my last moments alone in Antarctica. I feel both excited and extremely sad.”
She described her final days in beautiful words, “Another awesome day skiing past a parade of beautiful mountains beneath crazy clouds. This last couple of days have certainly been my reward” 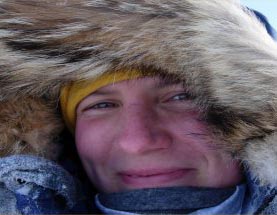 On 23rd of January, at 1:49 AM she completed her journey and congratulated herself by tweeting “!!!Felicity has reached her destination-Hercules Inlet-after 59days !!!Congratulations to the 1st female to traverse Antarctica SOLO.V proud”

She spent her childhood in Kent, England, and studied physics and meteorology. She worked for the British weather service and was expert in expeditions in subzero environments, she also led a group of skiers in the Arctic, the Antarctic and Greenland before. According to her website, she left the UK at the age 23 and spent three long years working as a meteorologist in the Antarctic with the British Antarctic Survey. She led the first British women team to cross the Greenland ice-sheet and after the victory, she led several expeditions that included the largest international women’s expedition to ski to the South Pole named the Kaspersky Lab Commonwealth Antarctic Expedition.