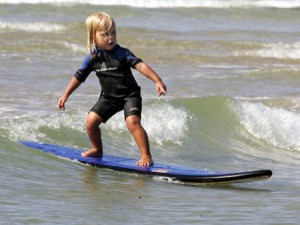 In the year 2007, at the age two, Jaylan Amor mastered surfing the waves outside of Brisbane, Australia and has recurred various titles ever since. Approximately six years ago, he started at Currumbin beach and today he is exceptional in catching the each wave come to him. He love for water is no different than that of aquatic creatures. His sister Shayla, who is now 9, is also a keen surfer. In an interview to an Australian News Channels, their father Peter Amor states, “Their mum and I were keen surfers when we were younger, so I guess our kids have got it in their blood.”

Marco Calasan, The Mozart of Computers 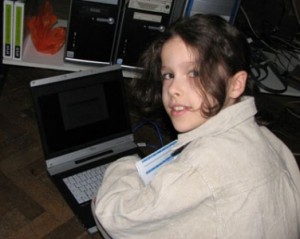 Born in 2000, Marco Calasan from the Republic of Macedonia was recognized as the the world’s youngest computer administrator certified by the software giant Microsoft in the year 2008. According to his family, at the age of 2 he was able to read and write and simultaneously started learning computer. His parents are IT experts and run a computer school for children. His accomplishments showered him not only with several accolades but made him a hero in locality. Macedonian Prime Minister, Nikola Gruevski gifted him with an IT lab with 15 computers to practice on. The media have frequently featured him as the “Mozart of Computers”. He wishes to create a new operational system for computers. 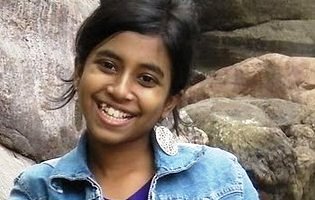 At the age 14, Sindhuja Rajaraman became the world’s youngest Chief Executive Officer (CEO). She became the head of an animation firm Seppan Organisation that was found by her father in October 2010. Her father, who is a cartoonist, inspired her to do animation and she finished her first project when she was in sixth standard. Sindhuja was called to be one of the fastest 2D and 3D animator by software lobby of NASSCOM at the Gaming and Animation Conclave 2010, Hyderabad.

She is famous among her employees for her humble nature and creative decisions. One of her colleagues once said, “She possesses lot of technical skills which even I did not know…She is very creative and comes out with ideas within fraction of seconds during our routine meetings”. 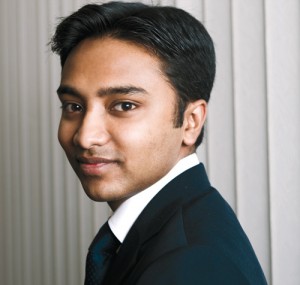 Now 24 years old Suhas Gopinath is also called to be the youngest CEO of website www.CoolHindustan.com, which was launched in 2000 when he was 14 years old. In the same year, he founded San Jose, California based web solution and networking company Globals Inc. He is the world’s youngest certified professional web developer. He was born in 1986 to a middle class family in Bangalore, Karnataka. His father was a defense scientist. Suhas completed his Diploma on Global Leadership and Public Policy from the Harvard Kennedy School at Harvard University.

His accomplishments bestowed several awards and honors upon him. In 2002, at the age of 16, CNBC and e-Business recognized him as the World’s Youngest CEO and after one year at the age of 17 in 2003, some reputed media houses across the world named him the World’s Youngest CEO including Limca Book of Records. The European Parliament and International Association for Human Values awarded him with the title ‘Young Achiever’ in 2007. He was the main face to represent the World Bank’s ICT Leadership Roundtable conference for adopting ICT in Africa in 2008. 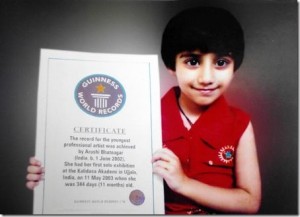 Arushi Bhatnagar, the Youngest Professional Artist in the world, was born on June 1, 2002 and has made the Guinness Book of World Records of ‘Youngest Professional Artists’. In 2003, on 11th May at the Kalidasa Akademi, she had her first solo exhibition. At the age of 1, she received her very 1st award trophy in a state level competition at Bhopal(M.P.) from Cabinate Minister Shri. Vikram Verma. She has already created over 3,000 paintings, made 15 solo exhibitions and received 23 honors and 9 awards including Gold Medal in national competition from child art club,Hyderabad, from State Minister Shri. Laxmikant Sharma. In 2005, she was the runner up and youngest in POGO Amazing Kids Award and the same year Arushi was invited as the chief guest to inaugurat New Art Gallery at EMERALD Heights School, Indore.