Florence Nightingale, the most respected English nurse, statistician and writer, was born in a wealthy upper-class British family on 12 May 1820 at the Villa Colombaia, near the Porta Romana in Florence, Italy. Serving people was a verdict of God and her biggest passion for which she dedicated her whole life. She is the pioneering figure for creating a different perception about nursing profession. Her devotion significantly modified the definition of nursing and won her widespread appreciation for it. She chose not to live in the suffocation of her upper class social vanities and expectations of her upbringings. Nightingale came to prominence when Crimea war broke out in 1853. Her pioneering work in nursing and saving unnecessarily dying soldiers in war with first aid treatment and preparing a group of nurses with strict rules to serve in best possible way made her a national heroine and got her ornamented with several honors and awards. She was dubbed “The Lady with the Lamp” for her habit of making rounds and checking wounded soldiers at night. 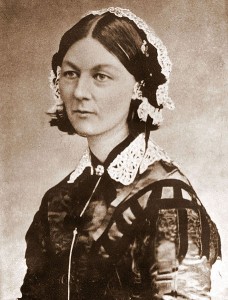 Returning from the war, she emphasized improving hospital conditions, for she wrote to reputed and influential people and inspired them to enhance hygiene standards in hospitals. By 1859, Nightingale established a training school for nurses at St Thomas’s hospital, London with the funded amount £45,000. In 1865, the first trained Nightingale nurses started at the Liverpool Workhouse Infirmary.

Nightingale wrote a book on nursing named Notes on Nursing, in 1859 which was the main curriculum at the Nightingale School as well as other nursing schools of her time. In 1870, she trained “America’s first trained nurse” named Linda Richards and assisted her to go back to USA with her adept knowledge to start high-quality and hygienic nursing schools. Linda Richards, later, continued and implemented her training in the USA and Japan and encouraged many women to come in the nursing profession.

In 1883, Queen Victoria awarded her with the Royal Red Cross; in 1907, she was first ever woman to honor with Order of Merit. After one year, in 1908, she was given the Honorary Freedom of the City of London.

Nightingale, leaving the significant contribution and teachings on how to serve mankind with soul and heart, died peacefully at the age of 90 on 13th of August 1910; in her sleep. Her birthday is now celebrated as International CFS Awareness Day.

“What the horrors of war are, no one can imagine. They are not wounds and blood and fever, spotted and low, or dysentery, chronic and acute, cold and heat and famine. They are intoxication, drunken brutality, demoralization and disorder on the part of the inferior… jealousies, meanness, indifference, selfish brutality on the part of the superior.”

“So never lose an opportunity of urging a practical beginning, however small, for it is wonderful how often in such matters the mustard-seed germinates and roots itself.”

“I think one’s feelings waste themselves in words; they ought all to be distilled into actions which bring results.”

“Were there none who were discontented with what they have, the world would never reach anything better.”