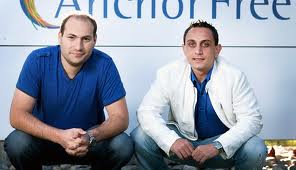 In 2003, at the age of 23, two Hebrew school mates David Gorodyansky and Eugene Malobrodsky co-founded AnchorFree.com with the intention of empowering users to surf internet while ensuring their privacy and offering advertisers the best opportunity with creative ads and target audience. Both Gorodyansky and Malobrodsky have had a successful past of creating several multi-million dollar business ideas which included creating Intelligent Buying Inc., which is an IT asset management firm.

AnchorFree is known to be a revolutionarily secure online media which turns all HTTP traffic into HTTP(S). Thus, protecting users across many malicious devices and browsers. They came up the interesting but peculiar idea of making a tool which will ensure the users’ Facebook or e-mail accounts as secure and private as a banking site. Anchor Free’s Hotspot Shield VPN encryption secures browsing sessions, detects and blocks potential malware, and protects your privacy allowing you to access all your favorite sites.

As of 2011, about nine million people of over 100 countries prefer using AnchorFree and according to Gorodyansky and Malobrodsky the company spends almost nothing on advertising; the success of the company depends on the word-of-mouth credits.
Gorodyansky says “we always wanted to do something beyond making money—we wanted something that had a social impact. The second priority was generating money. Our mission is to drive universal online security, privacy and free access to content for every user globally… anytime, anywhere.”